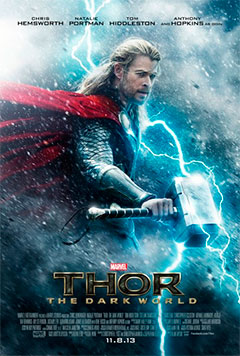 As much as I love Kenneth Branagh’s shakespearean Thor, Thor: The Dark World feels more like the comic book and that’s great.

Thor: The Dark World starts with Odin (Hopkins) telling us a story about his father, Bor, fighting the Dark Elves, beings from before the Big Bang who wanted to unmade the universe and bring darkness back. Their leader, Malekith (Eccleston), wants to use something called Aether to achieve this. Of course, he fails and escapes. Bor decides to hide the Aether since he cannot destroy it. Fastforward and we have Loki incarcerated, Thor (Hemsworth) and his buddies trying to restore peace all over The Nine Realms, and Jane Foster (Portman) on Earth getting infected by the Aether because plot. This will start a chain reaction that will make Malekith reappear, and everybody being useful in the quest to stop him, including Loki (Hiddleston).

From the very start this movie reminded me both of Star Wars and The Lord of the Rings. It was fairly appropriate for a movie about space vikings that also has Natalie Portman. Director Alan Taylor made good use of all the things he learned in Game of Thrones, and gave us cool battle scenes and a grittiness that wasn’t there in Branagh’s Asgard. But there were also enough stuff to make us realize these are not “gods”, but aliens with advanced technology.

Then, there’s the drama. Man, this movie gave us a couple of powerful blows down the line. And I appreciate that the actors were so on point during those moments.

Talking about actors, Hiddleston’s Loki totally stole the show. And he even wasn’t in the movie as much as one was let to believe. Loki simply had the best lines, whether is was for dramatic moments with his each member of his family, or the fun he was having using his magic and knowledge after he is recluted to help Thor. Hiddleston as Loki is so good that I don’t even think it’s possible to make a Thor movie without him.

As for Thor himself, Hemsworth sure has the character all figured out, and he’s very comfortable with him. He also gets to have his serious moments that show character growth, as well as his funny ones. And there’s also the romance with Portman’s Jane. One of the major problems people had with Jane was that Portman seemed to have zero chemistry with Hemsworth. Portman must have listened to that because Thor and Jane looked better this time around. Which is good, since Jane was an important part of the story. Thor’s other Earth friends, Selvig (Skarsgård) and Darcy (Dennings) also had things to do and were very entertaining to watch.

Again, Thor’s Asgardian friends didn’t have much to do, but had their uses and provided plot advance and some laughs with their interactions with Loki. I just wish Asano’s Hogun had as much screentime as the others and didn’t get the treatment that Jet Li got in The Expendables 2. Elba’s Heimdal had more action this time and we also saw him as more than Asgard’s Guardian, but also as Thor’s friend which we didn’t see much in the first movie.

But of all the Asgardians, Thor’s parents where the ones with more to chew on. Hopkins’ Odin shows not only more vulnerability but also his core of steel that makes him a good king but a not-so-good father. For someone also called the Allfather, he sure can be kind of a dick to his sons. Russo’s Frigga is totally the Allmother though, and manages a better balance between queen and mother, specially to Loki. We see backstory in her interactions with him even if it’s not explicitly told. Also she can seriously kick ass! Wish we had more of her.

That aside, let it be said that Thor: The Dark World is hilarious. Sure, the stakes are higher and there’s a whole lot of drama and action, but in between is giggles all around~ But I guess that’s what has always made Marvel different than DC, who lately takes itself too seriously and when it doesn’t the result is Green Lantern.

For all it’s good points, I have two major gripes with Thor: The Dark World. First, as much as I loved the humor, sometimes it appeared too soon after a dramatic moment. It still made me laugh, but it cheapened the emotional impact. Second, I wish we had more backstory on Malekith, or showed more on his relationship with his second-in-command, Algrim (Akinnuoye-Agbaje), or anything really. You could see there was more to them, and I wished Eccleston had more time to shine. It would have made the bad guys more compeling villains, which is a serious problem Marvel has. I just hope for more of them in the deleted scenes in the Blu-ray/DVD.

But, despite its faults, Thor: The Dark World is another win for the Marvel Cinematic Universe, and makes us feel Phase 2 is in good hands.

BTW, you know Marvel movies have after credit scenes. This one has two. One mid-credits and the other after credits. So, stay put until the very end!