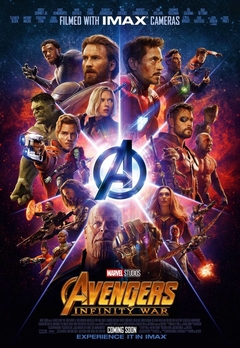 It’s no secret I’ve been a MCU fan since its first movie, Iron Man, back in 2008. After 10 years and 18 movies, I had quite the amount of expectations for the most anticipated movie of the year. So, how was it?

I’ve been emotionally compromised. I left the theater in disbelief and immediately wanting the sequel.

Avengers: Infinity War continues after the events of Thor: Ragnarok (specially its post-credits scene), where the Mad Titan Thanos finally makes his move on the Infinity Stones, and our heroes will race him both in Earth and Space to try to thwart his plans to destroy half the universe with a snap of his fingers.

I’ve got to give the Russo brothers credit for pulling off this mad juggle of so many characters, giving all of them a time to shine, even if some shone more brightly than others. The way they were all traveling in different groups, trying to stop both Thanos and his lackeys made for an exciting movie, since they were moving in different places at the same time, most of the time without knowing what the other team was doing. It was specially amazing to watch The Guardians of the Galaxy team up with (some) Avengers for the first time, and see the ways they did and didn’t click.

While Team Captain America had the most noble characters and the better team-players, Team Iron Man was the one with all the snark and angst. And the latter had the better actors in my opinion. Thor was a great bridge between both of them and the Guardians. Chris Hemsworth managed a great balance between pain and comedy, perfected after Thor: Ragnarok. His relationship with Rocket Raccoon was hilarious yet quite respectful.

And then there’s Thanos. Oh boy, that villain was given more personality than I was expecting. Yes, his genocidal plans are horrible, but he did try to explain his awful logic, that made sense if you were a sociopath with delusions of self-sacrifice (meaning sacrificing what he cares about, not actually himself). And his twisted relationship with Gamora was such a treat. And angsty treat of a toxic parent-child relationship. Josh Brolin did a great job with the mo-cap, and he managed to make this giant asshat emote quite a bit.

His Children were a bit of a mixed bag. They had their moments, but Ebony Maw was the clear MVP, being the one with more dialogue and the one who managed to advance the plot.

There’s a character I wasn’t expecting to see, and some characters that I expected to see for longer, and damn that was painful. Then there was Peter Dinklage and his role that was a pleasant surprise. Also a surprise was the characters that didn’t appear in the film, even if they got a throwaway reason for that. We will probably see them in the sequel. Maybe.

To say the special effects and battle choreography were good in a production this big is a given, but I will still give them kudos for all the different types of fights we had, highlighting every Avenger (and Guardian) particular talents and strengths. And yes, the music of the MCU might not be as iconic as other franchises, but the return of Alan Silvestri was appreciated, and the soundtrack was on point with the few recognizable themes.

Avengers: Infinity War didn’t manage to be the best MCU movie, but it is an amazing study in how to please the fans while still being able to surprise them. It leaves the fans wanting more, which is a good thing because the MCU has plans to stay for a long while yet!

P.S.: There’s one post-credits scene and it also leaves you wanting more. As expected, there are direct references to all phase 3 movies. Also, once again trailers lied to us dammit!