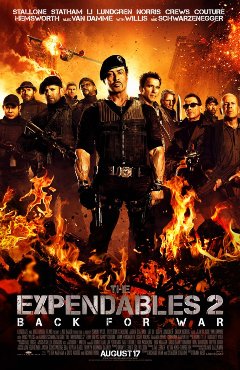 Disclaimer: I have not watched the first Expendables opus, so this film was reviewed on a stand-alone basis without drawing any comparison.

Like always, the summer season brings us a slew of action-packed blockbusters, each boasting a fair amount of celebrities and a dizzying budget, all for the pleasure (sometimes torture) of our eyes and ears. Exuding testosterone with its strong display of fire, guns, muscles, and clenched jaws, the poster for The Expendables 2 fits nicely into this season’s movie collection.

Do you have an hour and a half and few dollars to spare for pure entertainment purposes? Are your neurons in utmost need for a break? Are you a devoted fan of any of the actors listed above? If you answered yes to any of these questions, then please go to your closest cinema, grab your favorite snack and sit down to enjoy the fun ride that The Expendables 2 will provide you with.

The film wastes no time in showing us the cards by starting out with an epic festival of stunts, gunfire, and one-against-all fights. The fans get to gush at the appearance of their favorite hero, the newbies start getting into the groove, frantically munching on their popcorn. Everyone’s happy. Now, this level of happiness will go up, stay constant or significantly go down depending on your expectations regarding the film’s storytelling because basic is the best adjective to describe it.

In summary, Mr. Church (Willis) has come back to make Barney Ross (Stallone) an offer he cannot refuse: mobilize his crew to bodyguard tech savvy Maggie (Yu Nan) so that she can safely retrieve a secret device hidden in a remote part of Albania. Ross begrudgingly accepts what seems to be an easy mission. However, things get complicated when the team loses the device to Jean Vilain (Van Damme) and his bloodthirsty henchmen. All hell breaks loose when, to add insult to injury, they commit an unforgivable act that will lead Ross to take Maggie and Church’s mission as his own. A frantic chase after Vilain is opened, during which we get to enjoy many cheesy but nonetheless entertaining action scenes, hilarious jokes told by self-deprecating movie icons and sprinkles of mildly emotional moments.

The Expendables 2 is so over-the-top and cartoonishly funny that it is almost a parody of the genre. The names of the characters alone betray the film’s pervasive tongue in cheek humor: is there anything cornier than a villain named Vilain, a mercenary named Lee Christmas (Statham) or a sniper named Bill the Kid (Hemsworth)? Watching the film, we can feel that the persons involved in it did not take themselves one bit seriously and had a great time doing so. That, to me, is very refreshing, considering the ever increasing amount of pseudo-nerdy, subpar action flicks that are shoved in our theaters (ahem, Battleship? John Carter?).

As expected, Stallone gets the most screen time and he is closely followed by Statham. However, no matter how much I enjoyed seeing their great display of brotherly love, I had a lot more fun with the appearances of Chuck Norris and Schwarzenegger, who were literally applauded by the rest of the audience. Unfortunately, their combined screentime does not exceed ten minutes. I also wish the character played by Van Damme had been more developed because he definitely had the potential to be a much more gripping villain.

All in all, The Expendables 2 is an entertaining movie that will at the very least make you chuckle, provided you leave your brain at the door.