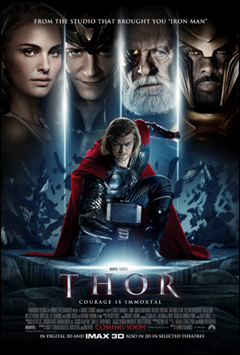 As part of the blockbuster films of this year and in preparation for the eventual Avengers film, Marvel Studios unleashes the god of thunder into the big screens. Thor is an American superhero film based on the comic book by the same name, starring Chris Hemsworth (Star Trek) as the hammer-wielding warrior.

Thor is a powerful, yet arrogant warrior. During his crowning ceremony to become King of Asgard, it didn’t went as planned due to an invasion from the Frost Giants of Jotunheim. Thor, along with his brother Loki (Hiddleston), Sif (Alexander) and the Warriors Three (played by Stevenson, Dallas and Asano) strike back in retaliation, reigniting once again a war between Asgard and Jotunheim, ruled by King Laufey (Feore). Due to Thor’s actions at Jotunheim, his father Odin (Hopkins) strips Thor from his powers and exiles him to Earth as punishment along with his hammer Mjolnir.

In Earth, he meets and befriends scientist Jane Foster (Portman), who works with her co-worker Darcy (Dennings) and her mentor Erik Selvig (Skarsgård). Meanwhile, Loki becomes King of Asgard after Odin falls into the Odinsleep and has full intentions to continue with the war, which is something Odin never wanted to see happen. During Thor’s stay in Earth, he has to deal with the S.H.I.E.L.D. organization (previously seen in the Iron Man films) in order to retrieve the Mjolnir, help Jane recover her research items and put an end to the war he started.

Thor is an action/adventure film with kickass fighting scenes, but it also features its share of humor during Thor’s stay in Earth thanks to Thor being unaware about how things are done in Earth and comes across as being unintentionally funny and Darcy is also funny to watch. Despite that, Thor is actually enjoyable to watch due to its great visuals, humor, good selection of cast members, it doesn’t take itself too seriously and the Avengers set-up here wasn’t tedious to watch like in Iron Man 2. Australian actor Chris Hemsworth did a very good performance as the god of thunder throughout the entire film and the rest of the cast are great enough to keep you hooked to the film from start to finish. Natalie Portman plays a great romantic interest to Thor, Anthony Hopkins serves as a soild Odin and Kat Dennings stands out among the cast thanks to her comedic lines.

The Thor character may not be a well known superhero when compared to the likes of Spider-Man and Wolverine, but Thor is a welcome addition to the Marvel Cinematic Universe nonetheless.

P.S: There’s a post-credits scene in this film, but I’m not gonna spoil it for you.