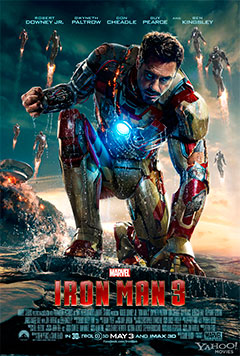 Everything is not fine for Tony Stark (Downey, Jr.) after the events of The Avengers. Besides the anxiety attacks, misdeeds from his past have come back to bite him in the ass. And when his friend and security chief Happy Hogan (Favreau) ends up pretty bad after an attack, Tony decides to threaten the guy responsible: The Mandarin (Kingsley), a didactic terrorist who likes to be evil on screen. That doesn’t turn out too good, but he’s Tony Stark and he’s a resilient fellow.

Also, Iron Man 3 starts with a voice over and it happens during Christmas time. That’s so Shane Black.

Black has definitely proved once more to be a great filmmaker and scriptwriter, giving fresh air to the franchise after not-so-good Iron Man 2. He and Drew Pearce manage to pick apart Tony Stark and show us what he can be when he’s not Iron Man, and yes, this means more moments of Stark being a mix of Sherlock Holmes and James Bond than we are used to. They also gave us more to the relationship of Rhodey (Cheadle) and Tony, and when Rhodey is not nagging at Tony and taking his armors away, he’s a pretty great dude to be friends with. And there’s this buddy feel for moments and it’s so much fun. They also made Pepper (Paltrow) do things besides crying and screaming for Tony. Awesome things. And her brief team-up with Maya Hansen (Hall) made the movie pass the Bechdel test!

As for the acting itself, they were all more or less great. I’m glad to see emotions I haven’t seen before pass through Tony Stark and Pepper Potts’ faces. Downey Jr. also had great moments with the kid he finds when he crash-lands in Tennessee. Whether you like precocious kids or not, those scenes provide some of the best Tony Stark wisecracks of the movie.

They could have done more with the new important characters though. Hall as Hansen was robbed. The character was fine, but they didn’t do much with her and how she ended up wasn’t that great either. I mean, sure, it was great for what it mean for the story, but it sucked for her as a character. I hope we get extra scenes with her in the Blu-ray/DVD.

Now, the bad guys are a special case. You see, the weakest point of all Iron Man movies have been the bad guys. They don’t do much with them, and it’s always Tony must discover/solve something about himself while fighting this bad guy who is good but could have been better. Here the villains are brilliantly played, especially by a superb Ben Kingsley, but their motivations are not very clear. In the case of Aldrich Killian, besides his plan to be the power behind the power, it seems we are in a “revenge of the nerd” kind of situation, complete with make-over. And about that twist regarding The Mandarin, it didn’t bother me at all. It felt very meta, and even from the marketing we could see this was not a faithful representation of the comic-book character. As for the Extremis henchmen, only the two that had lines were notable, but their power sure looked interesting to watch.

Oh right, let’s talk about the visuals. It was curious that as much as I loved the entertaining one-liners, it was the moments laden with visual effects that gave me the biggest emotions. Watching Stark Mansion in Malibu fall into the oceans was painful, especially when you saw DUM-E go down too. Watching all armors in play was quite thrilling. And then, there was Iron Man saving the people falling from Air Force One, where they actually dropped skydivers and then tinkled things in edition. That one was kinda cool too.

Finally, don’t expect Wan Xueqi to appear much in the movie, even if his presence is important for Tony Stark’s state at the very end of it. It does make me wonder what extra scenes the Chinese version has. Also, stay for a cute after-credits scene!

So yeah, Iron Man 3 was pretty good; and if it means it’s the end of Tony Stark’s solo adventures, it’s a fine way to go.