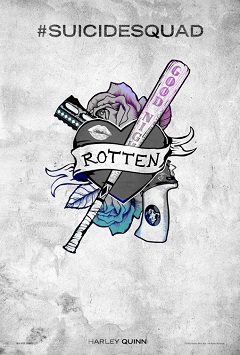 2016 seems to be a year in which governments/politicians and attempts of regulating/controlling superheroes are storytelling elements in both Marvel and DC Comics live-action properties, and Suicide Squad is no exception to that rule.

Following the events of Batman V Superman: Dawn of Justice, the USA government feared dealing with the possibility of an evil metahuman [see: non-human superhero or supervillain] that could destroy the world.

“In a world of monsters, this is the only way to protect the country.”

Enter Amanda Waller (Davis), whom proposes using Task Force X in case something critical happens. The government isn’t okay with using a team of dangerous criminals as disposable assets to work on high-risk problems, but Waller gets the greenlight to assemble the criminal-ridden team when a mysterious force emerges in Midway City and represents a serious threat to the world.

But what happens if someone decides to betray Waller and ditch the mission? You’ll have to watch Suicide Squad to get an answer to that. If not, you could read the comic books regarding Task Force X or you can watch the 2014 animated film Batman: Assault on Arkham instead. Actually, the latter is a much better idea.

While David Ayer directed Suicide Squad, the end result feels like something Zack Snyder would have pulled off. Suicide Squad feels like watching a mash-up between Dawn of Justice and Watchmen with strokes of Sucker Punch and visuals that sort of evokes memories of Spring Breakers, but with more of a psychodelic feel. That’s not exactly a mix of greatness by any means, but Suicide Squad is very hit-and-miss as a movie.

To sum up the best parts of the film (and the fact that I can cite them is a problem) would be mentioning the set-up for gathering Task Force X — which played on the screen as entertaining music videos — Margot Robbie’s engaging performance as Harley Quinn that made me wish Suicide Squad revolved entirely around her (it does to to a lesser extent), the bar scene involving the team after things take a turn for the worst, and the very final scene of this film. Other minor highlights are Davis as Waller and Smith as Deadshot, and the latter still keeps intact his chemistry with Robbie [see: Focus].

But what about Jared Leto as The Joker? He was a sub-plot in Harley Quinn’s storyline and doesn’t get much screentime. Despite the wacky revamping that made Leto’s Joker look like a mixture of James Franco’s Alien and a Italian mob boss rather than the sadistic evil clown you enjoyed in the comics (or the Batman films involving Nicholson and Ledger), The Joker would have been a more acceptable, intriguing and believable antagonist than the magical witch Enchantress (Delevingne), whose reasons to turn against the world were at least more feasible than Apocalypse’s, [1] yet equally boring to watch.

Suicide Squad keeps intact the element of Waller’s hidden motives for using the team, which ends up driving the main story, but the execution and resolution of that story isn’t that fun to watch nor violent enough to live up to its film title. And just like Deadpool, the trailers were better than the film itself. Unlike the film headlined by Ryan Reynolds, Suicide Squad felt both exciting and boring to watch as a whole thanks to its action scenes, characters and convoluted storytelling that makes you appreciate (or feel envy if you are strictly a DC Comics fan) how the Marvel Cinematic Universe is planned out. Worst of all, you feel like the editing robbed you of a much better/cohesive movie.

Overall, I didn’t hate Suicide Squad, but you’re better off watching Assault On Arkham instead for a better story about Task Force X. Believe it or not, the DC Comics animated films are better structured than the live-action films.