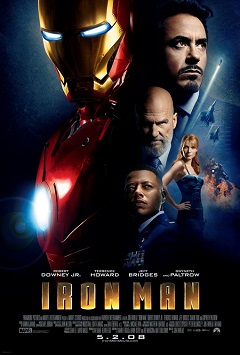 The film that started everything for the Marvel Cinematic Universe. If it wasn’t for Jon Favreau’s Iron Man being a huge hit, both economically and critic-wise, I doubt we would be thinking of having The Avengers, let alone having its highly-anticipated sequel Avengers: Age of Ultron premiering next year.

Iron Man follows Tony Stark (Downey Jr.), a playboy billionaire who also happens to be a genius engineer… and a philanthropist too. While he designs and sells weapons of advanced technology for a living, the rest of his time is spent on drinking alcohol and sleeping with women — at first sight, you could say that RDJ was born ready for this considering his past and I’d understand. Anyways, Tony experiences a change of heart when a weapons demonstration in Afghanistan goes wrong, leading a severely wounded Tony to become Iron Man and make changes regarding his lifestyle as well as his business affairs in order to survive. These changes not only rubs his company’s manager Obadiah Stane (Bridges) the wrong way, but it also sets in motion what we would later know as the Avengers Initiative.

6 years later, Iron Man still holds strong for me as far as superhero films are concerned thanks to its layered script that paces well the plot alongside the action scenes and display of humor alongside some subtext regarding the concepts of betrayal, use of weapons, terrorism, militarism, technology and other subjects without being heavy-handed about them. Iron Man not only delivers in terms of visual effects, explosions and spectacle moments — which is the norm for big-budget superhero films usually along with having expected post-credit scenes — but it’s the chemistry between the cast that really holds it together. Howard, Bridges and Paltrow congeniate too well with RDJ, whose very strong performance seems very natural, witty, entertaining and credible on screen. RDJ is the true heart of the movie, just like that reactor Tony uses to keep on living — it’s almost impossible not to imagine Tony Stark/Iron Man without him.

On my latest Iron Man rewatch, I noticed two things that I really enjoyed the most: the tale of how Tony Stark becomes Iron Man and evolves as a human being ends up being truly engaging despite Stark starting off as your typical rich douchebag character who ends up becoming a global hero that learns what the world really needs. Watching Stark fighting for survival in Afghanistan was interesting and captivating to watch as well as seeing him perfectioning the Iron Man suit later on (which is actually awesome and even funny to watch from a visual and comedic standpoint) while also dealing with his personal assistant Pepper Potts (Paltrow), whom does her best to shape Tony into a more likable person and serves as one of his few sincere friends alongside straight-man, military ally Rhodes (Howard).

The other aspect that I really enjoyed the most (and still do to this day) was the film’s ending.

That very moment makes Iron Man still hold the best ending ever to a superhero film since it sets it apart from every superhero film that has their usual pattern regarding the identity of the superhero. Iron Man gives that pattern two big middle fingers and not only sets big momentum for Iron Man 2, which sadly couldn’t top this one (and neither did Iron Man 3, which was still entertaining) , but it also gives the sensation (at the time of its premiere) that bigger things could happen within a comic book universe.

Still the best film out of the solo Iron Man movies. It’s not a perfect film by any means — the second third part of the film gets quite slow to watch — but Iron Man is still an outstanding cornerstone for the Marvel Cinematic Universe.