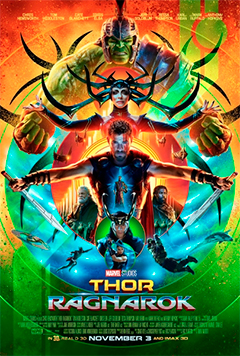 This has been the most fun I’ve had this year. And yet, Thor: Ragnarok gave me some food for thought hiding behind the chuckles and laugh out loud moments.

Basically we have Thor who, after some unfortunate revelations, ends up in Sakaar where he is forced to fight as a gladiator against Hulk, who has been missing since Avengers: Age of Ultron. Meanwhile, Hela, Goddess of Death, escaped from imprisoned to claim the suddenly vacated throne of Asgard, with the goal to subjugate and conquer, whether the people of Asgard wants it or not. Now, Thor (and his new team) must escape from Sakaar to save his people from Hela.

I would say the theme of the movie is identity. Many of the characters either had theirs stripped from them, or tried to destroy or bring back a past identity. By the end of the movie all of them will have to recreate a new identity for themselves. Just like the mythological Ragnarök, after the destruction, comes the renewal.

As for the cast, everybody was magnificent. Most of the main players were scene-stealers, and even the smaller roles (and cameos) had their time to shine. Chris Hemsworth’s comic timing was on point, and I loved that Taika Waititi managed to highlight this strength. Mark Ruffalo was good as both Hulk and Banner, but Hulk is where he shines, giving him so much character and his best incarnation in the MCU. Also, Thor’s relationship with both Hulk and Banner? Fantastic, the humorous parts and the quiet moments. Cate Blachett as a Hela owned her scenes, and it was amazing that Marvel’s first female villain was so powerful. Jeff Goldblum as Grandmaster was hilarious and weird, and somehow managed to fit so well in the film. Tom Hiddleston as Loki shows the character’s need for recognition, both in the grand sense and in his personal life. Tessa Thompson as Valkyrie was amazing as the physical incarnation of levity in the face of tragedy.

The film itself is both colorful and full of action, maxing up the entertainment at every moment that make the 130 minutes of the film breeze by.

Finally, the score is bold and fun, with an 80s vibe thanks to the synth music. There were also moments were they used themes from previous Marvel movies (Thor, Thor: The Dark World and Avengers: Age of Ultron) and even The Incredible Hulk series from back in the day. And that one use of  “Pure Imagination”? Perfect. I didn’t expect they would actually use “Immigrant Song” in the film, and I was happily surprised, specially the second time.

The one con Thor: Ragnarok has is that it feels a bit disjoined. Thor in Sakaar is really fun and comedic, sprinkled with entertaining action. Hela in Asgard is dangerous, full of exposition and sprinkled with dark humor. This is still the MCU, and the gallows humor was appropriate with her. Still, it kinda makes me wish we had two movies by Taika Waititi instead of one, but we know getting a Hulk movie is nigh impossible with the issues with Universal.

In conclusion, Thor in Thor: Ragnarok may not be the same Thor from comics, and maybe even not the same Thor from the first movie, but he has the same core and it’s just that he found his voice and we can appreciate that. It would be sad if this is the end of the Thor solo movies, it seems like a rebirth for him. And keep Taika Waititi in the MCU please. He has much more to give.

As with all Marvel movies, we have a couple of after credit scenes. The first one is related to future events and quite ominous. The other one is light-hearted and sorta resolves a loose end.