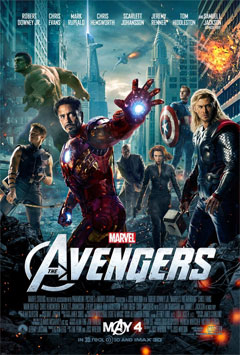 The culmination of years of work that started back in 2008 with Iron Man (and Robert Downey, Jr.). It was very important that Marvel got this right. And, oh boy, they certainly did!

I’m not afraid to show how geeky I am, and as such I was nervous that The Avengers wasn’t going to live up to my expectations. That somehow Whedon wouldn’t be enough as a movie director, as much as how geek-talented he already is. That the cast may fail to get the chemistry going, even though they seemed to get along so well. That maybe all the people who already saw it and waxed poetic about it, were overestimating it. Man, I am so glad to say that all my fears were unwarranted.

This movie is entertaining, flashy, funny, dramatic… and epic!

The cast was practically flawless. And the main ones, the Avengers, had more or less the same screen time, despite what the trailers implied by showing Robert Downey Jr.’s Iron Man so much. RDJ was still as great as ever but now he shared the mainstream spotlight with Evans, Hemsworth, Renner and Johansson. That last one was the best I’ve seen her lately, actually. Her Black Widow was tough but also showed emotion, and her bond with Renner’s Hawkeye was strong while keeping out of the romance box. The only romance shown was RDJ’s Iron Man and Paltrow’s Pepper Potts, who was, according to RDJ himself, something the actor wanted added in the film because it was logical to his character growth. I love it when the actors get their character so much!

The S.H.I.E.L.D. guys, while having less screen time, were also very well rounded. We finally see Jackson’s Nick Fury doing something else than being vaguely menacing, and Coulson’s (Gregg) fanboyish ways were a nice addition to his character. Smulder’s Hill didn’t have much to do, but there was the competent slightly confrontational attitude we expected from the character.

Now Mark Ruffalo deserves his own paragraph. Oh, Mr. Ruffalo, the little faith they had in you! You certainly showed them. He was strangely adorable as the geeky not-quite-zen Bruce Banner, and so awesome a Hulk. You see, this Hulk had personality! He wasn’t a bunch of CGI, he was real! He was strong, he was menacing, he was even funny. Good job, Mr. Ruffalo! I’m totally behind you if they decide to give you your own Hulk movie.

And now onto the bad guy. Tom Hiddleston, you magnificent bastard. Loki’s done hurting, or so he thinks. Now, it’s time to claim something for his own. Why not that planet filled with such lost creatures, they were clearly meant to be ruled. Yep, Loki is indeed a bastard, but still you can feel there’s something fragile underneath that rage. A self-consciousness underneath that icy bravado. And he’s so very angry that his brother chose to side with these mortals. The range of emotions passing through Hiddleston’s face was truly fascinating.

The movie itself was highly entertaining and funny. Yes, I must say it again. It was funny, hilarious at parts even! The one liners, the retorts, even physical actions. And it was well balanced with the dramatic parts and the heart-stopping action. The fighting scenes, especially the aerial ones with the Chitauri (Loki’s army) were very good. And the music was good but not distracting, it just enhanced it all. And the change of camera perspectives during these moments gave it a documentary feeling sometimes that worked rather well. In fact, when all the infighting, figuring out was going on, and drama is gone, the action is glorious! It needed to be seen a second time. Hell yes, I’ll watch it again.

I would have given 5/5, except for minor pacing problems in the first half and because of the slight cheesiness of Loki’s “allies”… though they got awesome at the mid-credit scene.

Still, The Avengers is easily the best movie of the lot. Well done, guys! Thank you, Joss Whedon. I am so pumped for more Marvel films, especially The Avengers 2!