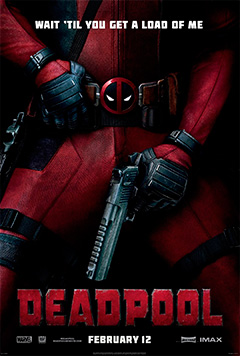 After an awful characterization in X-Men Origins: Wolverine (really, who had the brilliant idea to sew shut the mouth), Deadpool is back. And properly, this time.

Deadpool is a revenge story, love story, and an origin story. It’s quite simple really. Lovable anti-hero meets the perfect girl for him. They fall in love. He gets cancer. He goes to a place that he thinks will cure his cancer and get superpowers. Sweet! Nope, guy gets screwed up. Goes on a revenge rampage, while he tries to protect/get back his lady love.

This movie feels like a redemption for the character, from the great opening credits to the excellent track choices. And it’s thanks to the “real heroes” of the story, the scriptwriters. They made Deadpool an entertaining movie, even if you are not that familiar with the character. But you kinda have to be familiar with the current state of superhero movies. You enjoy some of the jokes better that way.

It had all the expected humor fans hoped: fourth wall breaking, one-liners, a degree of crudeness, self-awareness, real world references. There was also mention and mockery for the past feelings of X-Men Origins: Wolverine‘s Deadpool, of Ryan Reynolds in general and certain characterization of another superhero he played.

I also appreciate the work of first time director Tim Miller, with his handling of the action sequences without shaky cam or quick cuts. And the CGI was very well incorporated. Not that they could use a lot considering the budget, but it was well handled. I would have love if they had messed around more with the cinema format like he does in comicbook and videogames. Hopefully, in the next one.

There was hardly a boring moment, even if the flashbacks were a bit of a hassle at the beginning. Not that their contents were bad. In fact, Reynolds and Baccarin have great chemistry. It just took a bit of the rhythm of the movie. Then again, the movie would have started quite slow, if they had begun with the love story, as kinda cute as it was.

Yes, Ryan Reynolds did a good job at playing Deadpool as he should be. This was his passion proyect, and he was having the time of his life. You could see this from his acting as Wade Wilson before turning Deadpool. And it was a good way to get into the character’s head, before he turned into this practically immortal being who was a bit (a lot) unhinged. Wade Wilson was a douchebag, but a douchebag who cared. If Reynolds wants to play Deadpool forever, be my guest. Then he can stop doing other movies.

Morena Baccarin might be the love interest, but she was a personality. She was evenly matched with Wade Wilson in wits and propensity to violence, but it was her strength of character that elevated her from just the “cool girl” the protagonist dates.

Ed Skrein as a villain was adequate. He won’t be remembered as one of the best comicbook villains. He’s just an asshole you could hate. Gina Carano didn’t get to do much as a sidekick, but her action sequences were great, and showed off her physically.

The X-Men invited to the movie were a great choice. Colossus was such a good guy, which contrasted heavily with Deadpool’s lovable douchebag antics. As for Negasonic Teenage Warhead, besides her cool name, she was also good as the sighing young apprentice who’s having none of Deadpool’s shit, and can also kick mighty ass. I do wonder if she’ll drop the “Teenage” part of her name by the time she turns 20.

I feel the could have pushed the R rated a bit more though. Sure, there was a good deal of violence and some nudity of sexual and non-sexual nature, but it’s nothing we haven’t seen before. Of course if you are a teenager who’s sneaking into his/her first R rated movie, it looks so very different to the other superhero movies.

To think all this was possible thanks to the test footage that came about two years ago, which practically forced Fox to greenlight this movie. So whoever leaked that one, thank you.

Is Deadpool a cinematic masterpiece? Hell no. But it is as good as fans hoped it would be, and a damn good apology from Fox after the last Deadpool characterization fiasco.

Finally, while this doesn’t have anything to do with the movie itself, I feel I really must congratulate Deadpool‘s marketing team. Fantastic advertising campaign all around. Kudos to you, good sirs!

There’s an after-credit scene, so stay put. And yes, we are totally getting a sequel.