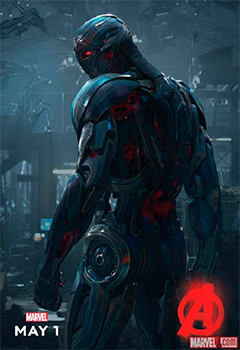 It’s time for the spectacle of the year. The continuation of one of the best superhero movies of all time. So, how does Avengers: Age of Ultron fares in the MCU?

In Avengers: Age of Ultron, Tony Stark (RDJ) and Bruce Banner (Ruffalo) accidentally create an AI, which becomes Ultron (voiced by Spader). The idea was to create an “armor” to protect the Earth without using the Avengers, because Stark also wants to protect his friends and teammates. In the end, Ultron ain’t got time for that and decides that in order to keep peace the Avengers needs to be destroyed. So, the Avengers, old and new, will fight against him.

The Avengers have evolved a lot since the time they first joined forces. In fact, I could pontificate about the team work for hours. You can see they’ve been working together for a while. Their fighting choreography, specially Thor (Hemsworth) and Captain America (Evans) team-up, is perfect. It’s obvious certain things have happened between the first and second movie, and even between the individual movies of phase 2 and this one. Not only relationships among the group have changed, but the relationship between the world itself and the Avengers have too.

Unlike the first Avengers movie, Hawkeye (Renner) got a lot of screen time! Which is great for Renner, who was grumbling a lot about it last time. We saw a secret side of Hawkeye, and he ended up being the glue tying these strong personalities together.

The other Avengers had their individual moments to shine, even though some had more focus than others. That was to be expected when you handle so many characters. But you do go to Marvel films for the characters and the action. And it didn’t disappoint. The film is all jokes, drama, action and character development. As such, there are hardly any of the slow moments that the first one had. And the slow moments that do come are so full of character development that it’s fine and even welcome.

The only issues I had about the characters was that Tony Stark seemed to have regressed. Sure, we can see why he had these issues and why he would behave the way he did. But the character growth seen in Iron Man 3 was stunted in this movie. In fact, the movie seems to reward Tony Stark’s bad decisions.

Also, I was not a fan of the relationship between Black Widow (Johansson) and Bruce Branner. Sure, they way she calms down The Hulk was beautifully filmed, but the “human” interactions weren’t good. Specially a certain cringe-worthy line. I understand what they were trying to say, but it just wasn’t well written and it could be easily misinterpreted.

As for the new characters, the twins were an interesting addition. Specially Scarlet Witch (Olsen), who moved along the plot and was the initial catalyst of the events of the movie. Her interactions with all the key players of the story were good, and it was nice to see her character evolution throughout the film. On the other hand, while Quicksilver (Johnson)  didn’t have a cool scene as the version in X-Men: Days of Future Past, his personality was much closer to the one in the comicbooks. Mainly because he was beside his sister, and their relationship is important to both characters. I just wish they have done more with him.

What about the villain? Well, Ultron is one of the best one MCU has offered yet. Not that it is that hard considering MCU villain problem. But still! Ultron is smart, sarcastic and petty. And, like the best of them, has tons of Daddy Issues. Which is great, because it was an integral part of his character. But you can clearly see how this AI was modelled after Stark, with his wit and impulsive genius, unlike the Ultron from the comicbooks who was more like his “father” Hank Pym. Also, I am glad his voice had the slight robotic tinge that wasn’t appreciated in the clips.

As for the other AI in the movie, Vision (Bettany, who also plays as J.A.R.V.I.S.) was also fantastic. He was a great contrast to Ultron with a calmer demeanor and low-key jabs. He was quite efficient, and has this certain “naivete” which I guess will evolve in the next movies. There were also hints of the future relationship he will have with Scarlet Witch.

Of the smaller roles, the one that stands up is Andy Serkis as Ulysses Klaw, because hey it’s Andy Serkis’ actual face! It’s obvious we will see him later and it’s nice to have the Wakanda/Black Panther connection. Claudia Kim as Helen Cho was good addition to the cast too, even if it seemed she came out of nowhere. This gal is smart and brave, and has a bit of a crush on Thor, so I wish she was there some more. Then there were War Machine (Cheadle) and Falcon (Mackie), the former featuring way more than the latter; but both being there having fun and establishing their presences in future movies.

This movie is by no means perfect, but it is entertaining. It’s a spectacle, more like a comicbook than many of the other movies before it. And while the CGI in the clips released didn’t look that good in a computer screen or smart phone, in the big screen the CGI looks good. And, despite the huge amount of clips and TV spots we have seen, it’s nothing compared to all the action and fun one-liners you get in the movie. In fact, throughout the main action moments (that first scene, the Hulk vs. Hulkbuster and the long long final fight against Ultron) I was smiling so hard my face hurt afterwards.

The problems Avengers: Age of Ultron has are quite the opposite of the ones the first movie had. I did comment that the movie has barely any slow moments, and it’s a great rollercoaster ride; but that can be a problem sometimes. Joss Whedon did say that the original cut of the movie was over three hours long. And it shows. It is noticeable that some scenes were cut, and a couple of parts feel rushed. Also, some side stories felt very obligated in order to connect them to future movies. And not to the one movie that would make more sense either.

All in all, Avengers: Age of Ultron is a darker film compared to the first one, but all the fun masks it well. You just realize how dark it is after you are halfway home and thinking about the movie. But it is a decent addition to the MCU, and it shows that Marvel still has a lot more to give.

There’s a mid-credit scene, but not a end-credits scene. You don’t need to wait until the end. The mid-credit scene is linked to the next Avengers movie, the two-part Infinity War films.