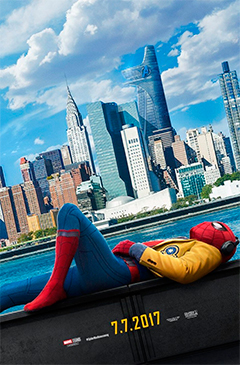 While not as great as Raimi’s Spider-Man 2, I will say Spider-Man: Homecoming is as good as that first Spider-Man movie, with less high stakes and in a more intimate manner.

It’s been months after Captain America: Civil War, and Peter Parker (Holland) has a difficult time readjusting to his regular life, now preoccupied with when will he have his next Avengers adventure, and pestering Tony Stark’s assistant, Happy Hogan (Favreau), non-stop. Until a new villain appears, the kind Peter has never taken on before. He will use this chance to prove it to himself (and Stark) that he has what it takes to become a full-fledged Avenger.

This is not a rehash of the origin story, which we have seen twice in the cinemas now. It’s more of a story where Spider-Man will learn how to take on big baddies. The results? His high school social life suffers, and he makes dumb choices in his superhero-ing that might end up with him or others getting hurt.

This is the best teen movie I have seen in ages. And it has lots of humor without being a comedy. Tom Holland manages to carry this film without problems, with great help of a fantastic supporting cast. His portrait of both Peter Parker and Spider-Man is practically perfect. He’s also the only film Spider-Man who actually showed us a full high school experience. He will surely remain in high school for the sequel. Something never seen before since both Raimi’s and Webb’s versions took Parker out of high school as soon as they could, though it might be because Holland actually makes Peter Parker look and act like an actual teenager. In Spider-Man: Homecoming, you can see him try to be a kid and also wanting more responsibilities than he might be ready for. So yes, he’s just a naive kid with both school and superhero problems.

Talking about his high school, I appreciate the update in the archetypes represented. If you are a purist, you might be annoyed by some of the casting choices, but I found it refreshing. Revolori’s Flash Thompson is a bully, but no longer the jock kind, but the rich entitled one. Harrier’s Liz is the popular girl Peter has a crush on, but she’s not a mean girl at all, and everybody likes her because she’s, well, nice. And they are both smart. In fact, it seems there’s not only lots of diversity in school, but also brains to spare. Most of the kids Peter Parker interacts with are part of the schools’ academic decathlon team, this includes his best friend Ned (Batalon), who accidentally discovers he is Spider-Man, and will both get him in some trouble, but also help him a lot. Rounding up the group is Zendaya’s Michelle, who doesn’t appear much, but when she does she’s a scene-stealer, with great deadpan comic timing as the dry antisocial girl.

One of the most important adults in Peter Parker’s life is Aunt May (Tomei), whom he wants to “protect” from the truth of his superhero-ing. But she’s also there to make basically every man near to crush on her. That said, Peter has a healthy relationship with her, with May acting as a more relaxed mother figure, due mostly to her being the youngest she has been ever depicted.

The other important adult is Tony Stark (Downey Jr.), who was used sparingly, which was great. Some were worried he will high-jack the film, and it wasn’t the case. He’s a mentor figure, and while he added some levity, he also had that one moment where he had to give a verbal smackdown to a reckless Peter. While you don’t see much of Tony Stark, his presence is always felt, because Peter mentions him a lot. It was quite clear that even if he wasn’t there, he was keeping taps on his protégé.

As for the bad guy, Vulture/Adrian Toomes (Keaton) is a blue-collar villain and his backstory shows that he was the boss of a demolition team that lost a lucrative contract, cleaning up New York after the first Avengers film. He ended up becoming the leader of a gang that deals superweapons based on stolen technology. When wearing the Vulture armor, he sure looks imposing and dangerous due to the sheer size and aggressive combat technology in display; but it is when depicting his “regular” Adrian Toomes counterpart that Keaton really shines with a distinctive intense but quiet menace.

The film also includes other more-or-less classic villains like Scorpion, Shocker and Tinkerer, which are mostly a nod to Spider-Man fans. Donald Glover is there as Aaron Davis, a small-time criminal, who is actually the uncle of Miles Morales (the other current Spider-Man) in the comics. Yay! Also, his interaction with Spider-Man is perfect, and highlights how not ready Peter Parker is at dealing with criminals when he’s not fighting them.

The action scenes were entertaining, but many of them, specially those with Vulture, were depicted in night-time and that lessened the quality. Except for the boat one, which looked amazing. The final fight, while not as intense, did have a nice Spider-Man moment though. But it is when he’s saving people that Spider-Man shines. And the best parts were definitely when he’s interacting with his hi-tech suit and learning how to use it.

As for the soundtrack, Michael Giacchino is one of the better Marvel scores, but that’s not saying much. Still, love his update of the classic Spider-Man theme.

So yes, go watch Spider-Man: Homecoming for a coming of age story and a refreshing take of a superhero that’s already on his third try. Let’s hope it will be the last one for a long while. Considering Marvel is in charge, I have faith. Also, the last few scenes, specially the very last before the credits, are gold.

We have a couple of end-credits scenes. One clearly related to a possible plotline for the sequel, and another that was just there to both frustrate you and make you laugh.