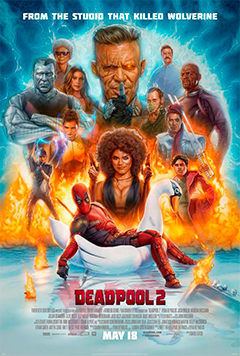 A couple of years ago, the Deadpool film adaption felt pretty fresh; and Deadpool 2 still hits all the right notes successfully, which was the reason that made the entry to the franchise worth the watch for the most part.

“Listen to the pain. It’s both history teacher and fortune teller. Pain teaches us who we are, Wade. Sometimes it’s so bad we feel like we’re dying, but we can’t really live until we die a little, can we?“

Deadpool 2 is about dealing with emotional pain, being a superhero and f-words. As the opening sequence lets you know that something truly awful happens in Wade Wilson(Reynolds)/Deadpool’s life, The Merc With A Mouth will also see himself occupied by dealing with the protection of young mutant Russell/Firefist (Dennison), whom is targeted by the time-travelling soldier Cable (Brolin).

The core stories of Deadpool 2 and Looper are quite the same, and speaking about it will spoil the Fox-Marvel film. However, the tone for both are pretty different, as DP2 is pretty much a dark comedy that deals with death and child abuse. The screenplay keeps intact the things that made Deadpool fun, thanks to its main character and several subjects which are referenced for laughs: pop culture, real world, other movies (including Logan, which also shares some key points with DP2, sort of), Ryan Reynolds himself, the first film, Marvel, DC Comics, etc.

The most notable improvements are the violence and action scenes; expected, given the budget increase; and the supporting characters (old and new). While some of the older supporting characters felt more developed and relevant than 2 years ago — metallic mutant Colossus (Kapičić), taxi driver Dopinder (Koni) and Blind Al (Uggams) come to mind here — the new ones breathe life into the Deadpool series and nicely carve a path for future installments. Josh Brolin (whom is still fresh off of appearing in Avengers: Infinity War) makes a fine turn as Cable, and Julian Dennison (you should watch him in Hunt for the Wilderpeople) is pretty good as Firefist; but Zazie Beetz as the lucky Domino steals the show — she gets things done and brings a air of confidence that feels refreshing to watch. Also, I hope that we get to see more of Teenage Negasonic Warhead (Hildebrand) and Yukio (Kutsuna) in a third Deadpool film since we now have an LGBT couple (the film doesn’t make a big deal out of them, although their roles are minor) in a Marvel film.

One of the things that annoyed me the most in my movie-watching experience had nothing to do with the film production itself: the film’s subtitles translation were pretty specific to the Latin American region in regards to some of the pop culture jokes made by Deadpool throughout the movie. Example: “Todd” is not “Chayanne”. I am aware that translating “Earl” to “El Brayan” (yes, I said that) felt funny to a few people watching DP2 in the cinema, but the way the LatAm-friendly translation was displayed in the subtitles lessened a bit my enjoyment of the film.

In the end, I enjoyed watching Deadpool 2, but a little less than the first film mostly because of the novelty factor surrounding the 2016 film.

P.S.: As always with superhero films, stay for the post-credits.