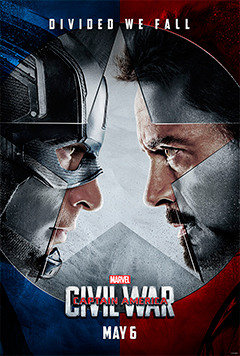 The film starts with part of the team in a mission, and it results in collateral damage. It will be the straw that broke the camel’s back. Soon many countries will ask for accountability and the Avengers will be split, for those who agree with Tony Stark that some oversight is needed, and those like Steven Rogers who believe that it’s better that they regulate themselves. Things will turn for the worse when ex Winter Soldier Bucky Barnes reappears, and Steven Rogers will do what he must to protect his friend, even if it’s against the law.

CA: CW is loosely based on the Civil War comicbook event, but the scope is both bigger and smaller. In the comicbook event, there were many more superheroes involved, but the Superhero Registration Act reach was US government only. In the film, the system of accountability and regulation would to be in the hands of the UN. The way it developed in the MCU was also much more coherent, because it was the natural progression to the happenings in the other films.

Both Chris Evans and Robert Downey Jr., the opposing forces in the film, are in top form, both by now very comfortable in their characters. And make no mistake, this is a Captain America movie, and while there are lots of superheroes, it’s him and his devotion to what he believes is right, as well as his friend, that carries along most of the actions. It’s no the first time the Russos bring out the best (and “worst”) of Steve Rogers from Evans, as we saw in CA: TWS; but it is their first time working with RDJ and they did a superb job. Just like we saw in Iron Man 3, Tony Stark is more than quips and quirks, and this film makes fans who only know RDJ as Iron Man realize that yes, he can be a dramatic actor. Barnes as Bucky continued with the arc started in CA: TWS, specially his relationship with Rogers, and while this interaction was very emotional, he got to explore a more light-hearted side with Mackie’s Falcon.

As for the rest of the team, it was gratifying to see logic was used in how the teams were split, as in which hero followed which leader. The lack of Thor and Hulk was also acknowledged. The way the new characters were introduced was also very organic, and it wouldn’t surprise anyone if they became fan favourites. Boseman as Black Panther and the newest Wakandan King with a grudge gave us a very intense performance, who managed to be both emotional and stoic. Holland as Spider-Man was just perfect, the one many will recognize from comics: youthful, enthusiastic, nervous, fanboyish. And the film managed to balance the quips coming from him, as well as an eager Ant-Man and more subdued Tony Stark.

It was great that Markus and McFeely managed to keep them all in character while they exposed their respective positions and how they acted on them. The interactions between Bettany and Olsen’s characters managed some poignant moments because of this.

Sadly, we have once more a perfectly good actor wasted as a not-so-great villain. Brühl’s Zemo is also driven by revenge born from collateral damage. And while it is notorious that the events of the film came to pass through his actions, it is also true that if he weren’t there, he wouldn’t be missed too much.

CA: CW might seem like a lot of drama sprinkled with funny one-liners, but it is also a MCU film, so it is filled with very entertaining action and superb special effects. The moment the heroes fight with each other is fantastic, and shows all the different Avengers’ super powers to their current full potential. Obviously we also see new moves and upgrades from what we have seen before. The Russos are also good at filming action scenes, showing them in either daylight or good lighting and with a camera that doesn’t leave the audience dizzy.

It’s been four years since I saw The Avengers, and it’s been that long since a movie left me with slight tachycardia. And while the reason four years ago was too much excitement, this time it was excitement + worry about the physical and emotional fate of the heroes. If you are a MCU fan, you have known these character for years now, and you want them to be OK. And just like with CA: TWS, this movie means a change in the status quo of the MCU. CA: CW manages to be both entertaining and make you care, and that’s exactly what we want from a cinematic universe that expects to live on from many years to come. It also leaves the fans with the certainty that the Russos will do a more than decent job with the Avengers: Infinity War films.