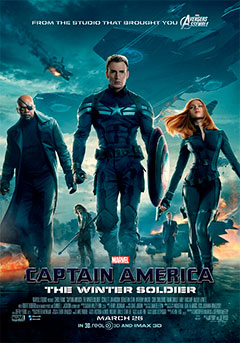 The first avenger is back for a solo adventure. Not that his adventure is that solo, since we have Black Widow (Johansson), Nick Fury (Jackson) and Maria Hill (Smulders) there too.

The story starts with the meet-cute of Steve Rogers (Evans) and Sam Wilson (Mackie), running around near the Washington Monument. Then Black Widow is here to take Steve to a S.H.I.E.L.D. rescue mission. One thing leds to another and Nick Fury is attacked, Cap and Black Widow are fugitives from S.H.I.E.L.D., HYDRA (that Nazi organization from the first movie) ain’t dead, and they have this efficient “ghost” soldier with the code name of The Winter Soldier who has ties to Steve Rogers.

Also, the Russo brothers are great at filming action. It had the perfect balance of over-the-top and real, you could see these guys were not regular people, but it was believable and make you forget these guys (and gals) were mostly stunt doubles on wires. And they didn’t need slo-mo to make you able to follow the action and focus on the fight sequences. Oh, the fight sequences, you could almost feel Captain America’s (and The Winter Soldier’s) punches! Extra kudos to the choreographer.

Like most of Marvel movies, Captain America: The Winter Soldier had humor, but unlike Thor: The Dark World where it was a tad too much, it was there when it was needed to lighten the drama and never overstayed its welcome. I find it curious, considering Christopher Markus & Stephen McFeely worked on both movies.

As for the acting, all the cast was on point. You surely believed Evans as a Steve Rogers who was hunted and betrayed. And the moment he realizes the identity of the Winter Soldier is great because you could see how it shocked him to the core. Johansson as Black Widow was even more kick-ass here, but also felt more human and had a great relationship with Cap. Mackie was hilarious as Falcon, but also had the gravitas needed to anchor Rogers when he starts to get adrift, a perfect friend in those trying times. Both Jackson and Smulders had bigger parts than in The Avengers, and their characters also had their time to shine showing their quick-thinking. Other remarkable smaller parts went to VanCamp and Grillo, which made me glad because their characters are kinda important for the Captain America franchise.

Robert Redford as Alexander Pierce was magnificent. A total snake who sees the current fears of society and works with/against them. I can see why Redford wanted the part so much. And Sebastian Stan as the titular character was badassery personified, who came with its own chilling soundtrack. Even if his backstory was not fully shown, the few moments where The Winter Soldier remembers who he is are gold. So yeah, no weak links in this one!

Finally, I’m glad Marvel is always up to raise the stakes, and the repercusions of this movie will be felt across the MCU… and it left me wondering what will happen on Agents of S.H.I.E.L.D. after this.

BTW, as with Thor: The Dark World, this movie has two after credits scenes: one related to a future movie (in this case The Avengers: Age of Ultron), and the other more related this particular Marvel franchise. Stay put until the end!