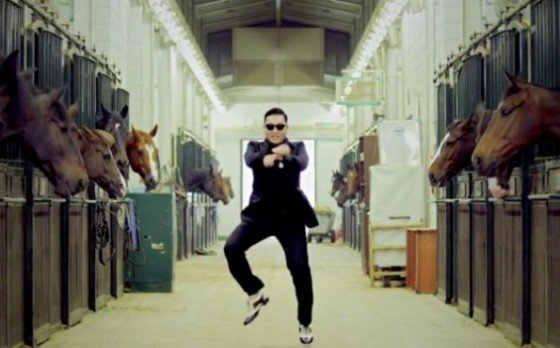 Since the launch of YAM Magazine we’ve been covering world entertainment, including a heavily biased focus towards the Korean music industry, following the spread of its popularity in Europe and Latin America [1][2][3].

With the massive explosion of Psy’s Gangnam Style into the worldwide pop culture scene, I ended up listening to the song for the first time a few days ago despite a couple of my friends promoting the song a lot on Facebook in such an annoying fashion. The end result of this: an unlikely conversation of Kpop between Amy and me, who has had little to no interest in the Kpop music world. Enjoy the conversation!

Rodrigo: Lately, it seems that PSY’s Gangman Style has become a big hit worldwide.
Amy: PSY’s everywhere. He just got nominated for best video at the MTV EMA’s.
Rodrigo: Yeah. Including SNL and teaching Ellen Degeneres and Britney Spears how to do his moves on The Ellen Show [1]. But more importantly, how the hell did a Korean pop song managed to get really huge in the States?
Amy: Well, you tell me. People that don’t really like Kpop seem to like this song… the main opinion seems to be “because the video is hilarious”. But then there’s people overanalyzing it, saying the video is actually making a social commentary. Whats your take on it?
Rodrigo: I avoided it until a few days ago. It’s really catchy and it can be fun at parties if you’re drunk, but it’s also the kind of song I’d hate if it gets overshoved… and a couple of my friends seem highly obsessed with it.

Amy: Would you say it’s the Macarena [MV] of Korean music? A few years after the Macarena, the Latin Wave exploded with Ricky Martin.
Rodrigo: I was thinking about him being the Michel Teló of Korean music for a recent comparsion, but Teló is a different issue. I mean, Teló got f*cking huge around Latin America, but PSY got a lot bigger in the States.
Amy: Teló didn’t explode into pop culture, though, I don’t think.
Rodrigo: It’s a regional thing. Plus, the English version of his song [MV] literally killed any chance he had to explode worldwide.
Amy: Hahahaha, talk about language ruining a song [1]. Wasn’t there a English version of the Macarena? It was a remix, wasn’t it? xD [MV]
Rodrigo: Youtube comment on the English Macarena video: “This was the Gangam Style of the 90’s”
Amy: I still don’t get what the Macarena is about, even though I know the lyrics. No one has sat down to write about a deeper meaning of the song, yet people have written on why they think Psy’s Gangnam Style is not what it seems to be [1]. Do you think there’s a deeper meaning to the song and video and that’s why it’s become so huge?
Rodrigo: I think it’s the dance moves and the English words. “Oppa Gangman Style!” and “Hey, sexy lady!” are easy to say for everyone.
Amy: Like Heyyyyyyyyyyyyyyyyy Macarena, ah!!
Rodrigo: Yeah.