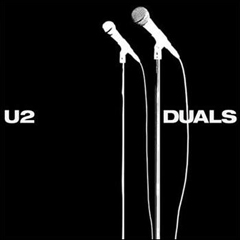 * Songs featured in an album from the collaborating artist.
** Live performances.

As you can tell from the tracklist, U2 Duals is a compilation album released by the Irish rock band. This limited edition release, pressed up in a custom-designed sleeve, features songs recorded by the band from 1987 to 2010. But as the album’s title hints, it includes collaborations from worldwide top class singers of different musical genres, ranging from opera singer Lucciano Pavarotti, The Rolling Stones frontman Mick Jagger, Green Day and South Africa’s Soweto Gospel Choir.

The album is actually a good listen from a variety standpoint and the quality that is expected from a band like U2. You can’t deny how interesting it is to see them performing with different kinds of musical artists throughout their history. In the case of the live performances featured in U2 Duals, Jay-Z appeared in a U2 concert last year in Auckland and he even made a reference to Bob Marley during his performance, while Mick Jagger performed with the band at the 25th Anniversary Rock & Roll Hall of Fame concert at Madison Square Garden in New York. That sounds awesome.

But the problem I have with U2 Duals, other than the way you have to purchase the album (it’s only available to U2‘s website subscribers), is that you may have heard most of these tracks in previous albums from the band or via TV. So buying it isn’t really necessary unless you’re a die-hard fan and you want to add it to your U2 album collection or if you never purchased an album from the band and happen to like the Irish rock band and the collaborators on it.

Best tracks: Where The Streets Have No Name because it’s one of my favorite songs and brings back good memories and When Love Comes To Town because the collaboration from B.B. King there is just plain awesome.

Preview it on Xiami.com | Like it? Buy it on U2.com (requires paid subscription)