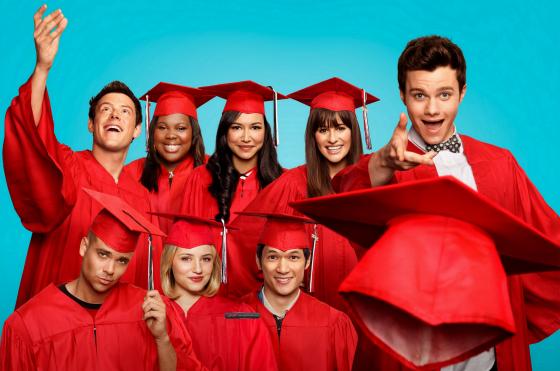 Remember the days when watching Glee used to be fun? Not anymore. Because Season 3 was not only more frustrating to watch than Season 2, it ended up being pretty rough to watch.

Season 3 focuses on the New Directions trying to win Nationals once again after losing last year. At the same time, it’s the end of high school for most of the characters — minus Artie (Kevin McHale), Tina (Jenna Ushkowitz), and conveniently-turned-junior Blaine (Darren Criss) — and they start to deal with their own plans, such as college and their relationships.

After the mixed reactions that most people had with Season 2, Ryan Murphy hired six new writers, including Ali Adler (Chuck) and Marti Noxon (Buffy the Vampire Slayer), because he and Brad Falchuk had to take care of American Horror Story‘s first season.

For about three episodes, Glee worked well because Finn (Cory Monteith) was barely used, Chris Colfer and Harry Shum, Jr. were allowed to shine on I Am Unicorn and Asian F, respectively, and the show laid out their initial storylines easily, which includes Rachel (Michele) and Kurt (Colfer) going to NYC, Finn’s future, Quinn’s (Agron) quest to recover her daughter Beth, Sue (Lynch) vs. Burt (Mike O’Malley) for congress, Will (Morrison) and Emma (Mays) dealing with their relationship and the West Side Story school musical.

And then the new writers started to work on the show and they fucked it up beyond belief. The messy writing ended up completely destroying some of the most popular characters (Rachel, Quinn, Will, Santana) and most of the storylines — new ones happen as the season continues — were offensive, lazy, boring and unfunny, dragging the show down to new lows — including being anti-female at the expense of highlighting Finn, Will, and even Kurt. The writing gets a little bit better after the very rough road to Sectionals, but Glee still manages to be frustrating with all the fuck-ups within their storylines as well as their very violent shoving of Rachel and Finn into the spotlight. Also, very big mistakes happened assigning people to sign certain songs as well as the use of songs — singing Katy Perry’s I Kissed A Girl to Santana (Rivera) was a huge crime. And don’t get me started with Glee having Darren Criss singing the most amount of solos during this season, which ended up being nothing short of annoying.

All the massive damage done in Season 3 makes you wonder if Glee really sucked ass since the beginning.

Season 1 didn’t suck because the writing and performances were sharper, but it still had a good amount of flaws (Finn, Quinn, Terri, etc.). Yet it was very enjoyable because it was simple and fun to watch and there were plenty of awesome moments (Dream On is my favorite Glee episode ever). At the same time, its huge success became a problem later on.

Glee ended up believing it was the shit and started to become more PSA-driven with the LGBT storylines highlighted in Season 2, which made the rest of the storylines suffer. Yet, the show could still hit its big moments often, but not as much as Season 1 did. Season 3 is a lot worse in this regard because their PSA moments clashed horribly with the ongoing storylines and turned some of their characters into PSAs and overshadows the few bright moments that happened during the latest season.

Mike Chang, Rachel and Kurt were used to make people feel like nobodies if they didn’t make it into Arts schools. Beiste (Dot-Marie Jones) was used to abruptly tackle domestic violence after she married Cooter (Erik Bruscotter), while simultaneously having Rachel and Kurt auditioning for NYADA and Puck was studying to graduate from high school. Suicide was tackled via Karfosky (Max Adler) during the Regionals episode, which also managed to pull off the texting-while-driving accident stunt with Quinn.

I feel bad for those who are going to watch Season 4, unless a massive overhaul happens in Glee. Unfortunately, the chances of that happening seem very low.