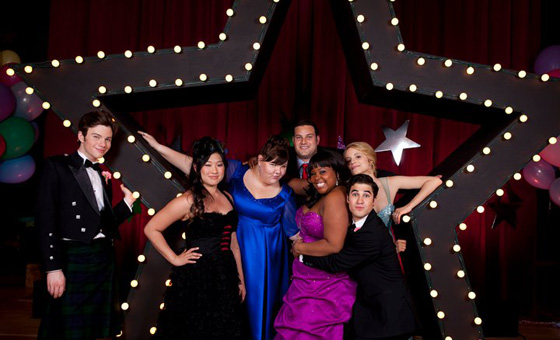 Glee Season 2 ended a week ago and now we’re posting the review as part of YAM Magazine’s LGBT Blogathon.

“New York is the place of opportunities. If there is any place in this world that you want to come to to be able to make it big or go after your dreams, it is New York City.”

Barbra Streisand! Yep, that song was used during this season.

Season 2 follows the New Directions glee club once again in their pursuit to achieve qualification to the Nationals choir competition held in New York City. Throughout Season 2, many things happened. Relationships were formed and broken, original songs were performed, Prom dance, shameless pandering to certain artists and Superbowl viewers, a couple of deaths, two marriages, new characters made their debut, some characters from Season 1 returned, etc.

But this season was different, as Ryan Murphy and the writers are highlighting LGBT characters in the mainstream spotlight through two storylines via Kurt (Chris Colfer) and Santana (Naya Rivera). Both storylines were actually well executed for the most part, and they might as well be the best thing going for it when compared to the rest of the storylines in the show.

Kurt’s storyline stands out the most thanks to Chris Colfer, Darren Criss as Blaine Anderson and Max Adler, who plays bully-turned-gay Dave Karofsky. Criss is okay, but Colfer and Adler gave great performances during Season 2 and the three of them ended up being very important for the representation of the gay community.

However, I actually prefer Santana’s storyline the most. Why? It didn’t feel rushed, it’s not totally in your face unlike the storylines involving the likes of Finn and Kurt, it’s developing her character very well, evolving her from cheerleader bitch to lesbian trying to live with her identity, still keeping some of the characteristics that made Santana a delight to watch. Naya Rivera absolutely leap-frogged everyone as the best actress during this season thanks to her character’s storyline, as well as being one of the funniest in the show while also having a great voice.

Other things worth praise would be the introduction of Sam, Holly, Beiste and Blaine, as well as doing their own original songs — managing to make crappy songs (Friday, Marry You) sound passable or better than the original versions. Standout actors also include Mike O’Malley and Jane Lynch.

However, not everything is great in Glee. Season 2 does some of the things that made Glee worth the watch in its first season, but they also screw some things up. What hurt the show the most during its latest run was the lack of care and concern for the characters and storylines along with the uneven writing. While most of the characters felt important and stood out very well, regardless of the screentime, in the first season, now you feel that the show only cares about selling songs on iTunes [see: Warblers] rather than focusing on character quality.

The writers even tried to address neglected characters during the Night of Neglect episode, but it came across as one of the worst episodes of the season, making Mercedes (Amber Riley) look terrible. Even the best characters, like Kurt and Sue, suffer from this at times. The worst thing Glee has going against is Finn Hudson.

“The fact is, most of the guys are better singers than you are, and even Mike Chang, who can’t sing, can dance. You kind of sing and dance like a zombie who has to poop.”

Not only did Cory Monteith give weak performances during the entire season, but the writers also managed to make Finn go from a somewhat likeable goofball to a bland, boring, unlikeable and confused douchebag.

Sure, you could say that Quinn, Rachel, Will and a few others are very unlikeable too, but Finn takes the cake here and could be one of the weakest TV lead characters you’ll ever see. The saddest part is that everything in the show plays second fiddle to whatever Finn is involved in. His character is almost screwed up beyond repair, dragging down the show’s quality and characters surrounding him a lot, especially Rachel and Quinn.

The writers could take a look at shows like Modern Family,Cougar Town and Game of Thrones. Why? All of those shows have big casts and still manage to balance their lead and supporting characters very well, making the whole cast not seem totally irrelevant.

Glee has the potential to be one of the most memorable shows of all time. There’s a lot of really good moments and some good episodes, but there were also some notorious negative aspects during this season. This time, the negatives are more pronounced, frustrating to watch and it can do some damage to the popularity the show has built during the past season. #thanksfinn

P.S.: Don’t forget to read the rest of the posts for the 2011 LGBT Blogathon.