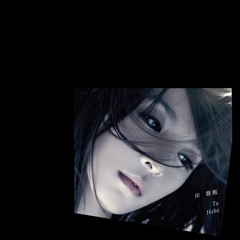 Sometimes it takes me a lot of time to review albums because music is supposed to be assimilated. This is why it’s taken me nearly two years to talk about Hebe’s debut and how she’s surprised us all. Springing from Taiwanese pop girl trio S.H.E., it was a little bit hard to think about what Hebe might do as a solo artist — I always thought Selina might be the one with the solo career.

Hebe (as she’s normally referred to) went the pop indie folk way with a terribly simple concept that just works. In her debut, just titled To Hebe, she writes a letter to herself — well, she doesn’t exactly write to herself because she didn’t write any of the songs, but writing something poetic in Mandarin is a awfully difficult task. However, the concept of the album is that: a letter To Hebe.

It’s packaged like that, too. The jewelcase wrapped in black paper with little To/From cards inside a black cardbox. The CD has a printed image of this compact cassette, as if she’d recorded the message for herself in one of those. A tiny part of me wishes she had used a real tape instead… or an alternative Mix Tape USB ;P

During the whole duration of the album, Hebe sings about the complicated dealings of love and self-love. In the chorus of both, Love? and Love!, she questions our loving other people but not being able to love ourselves, a theme that continues in almost all of the songs except for track 2, To Hebe, and track 10, For the Children. In the former, she addresses the issues of the present, the ephemeral nature of our time living and how we must preserve all this for the future — For the Children. This is a bit preachy, but she’s not telling us about it, after all.

The lyrics of the other songs are sometimes very accurate in their description of loneliness and pushing people away, which fits perfectly with the music. In Isolated Island, for example, she sings about being an island so small that big worries or extra tourists can’t fit in — and that, to her, is fine. Or in The Apartment Without Caretaker she sings of a comparison of an old man that is so used to being alone that he never says hi back to her, like an old window that never gets opened.

Even in a song called Mary, The Ant she sings about an ant that was in love with a cat across the road, who later fell in love with someone else. However, it didn’t matter to Mary because along her side of the road she had all sorts of life-fulfilling encounters. For a song about an ant, it’s incredibly down to earth~ You can’t lose what you never had.

At first listen, the album might be nothing special musically — though it’s production is outstanding — but given the time to dissect, it shows Hebe in a completely different light to those who might have taken her and S.H.E for granted.

Preview on Xiami | Like it? Buy it on YesAsia or iTunes