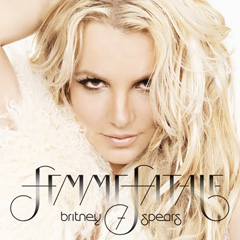 Femme Fatale marks Britney Spears’ seventh album in her discography since she exploded into pop idol-hood in the late 90s with that sexy school-girl outfit video of Baby One More Time. In here, she reunites with music confidante Max Martin — who was behind Baby One More Time as well as Circus.

The album is a heavily produced piece that could barely sound like Britney, and without knowing who Spears is, you wouldn’t distinguish that voice from any of those pop autotuned singers out there. But… is there anyone left in the world who doesn’t know Britney?

The album is empty, but palatable catchy pop that will get you to bob your head up and down — minds of the gutter — if you block understanding English for the most part. Some of the worst parts of the album come from songs like Big Fat Bass, which features the insufferable will.i.am with one of the stupidest hooks — and that’s saying something — like, “I can be the treble, baby, you can be the bass/it’s getting bigger, the bass is getting bigger.”

However, Femme Fatale reaches it’s best moment with How I Roll, heavy electro pop with a catchy bum-bum-ba-da-dee-dum-bum-bum hook and claps. Hey, don’t say I didn’t warn you about the emptiness!

The million dollar is… can Britney pull this album live (okay, “live”)? Yeah, that’s what I thought. I’ll stick with that Britney who rocked that VMA performance with Oops!… I Did it Again.

Best tracks? I gotta pick for sure How I Roll, and Inside Out