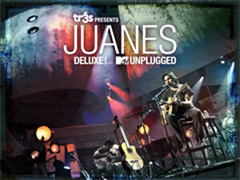 It’s no secret that I was pretty pumped about Juanes’ turn on MTV Unplugged, and it felt great that he wanted to open the show with Fijate Bien [1], especially because it sounds great on the album. The arrangements, though not overly modified, give it an even more Latin influence thanks to Juan Luis Guerra’s arrangements and overall take-over as a producer.

Juanes is really not unfamiliar to this strong Latin sound in his music — especially during his later years — but it’s more evident in this performance, even though La Paga [Xiami], A Dios le Pido [Xiami], or La Camisa Negra [Xiami] sound as strongly influenced in both their studio and unplugged versions. Though it’s not evident on the album, Juanes did seem a little out of his element during some of the performances, like in Nada Valgo Sin tu Amor or Todo en mi Vida Eres Tú. Apparently, he’s seeing this MTV Unplugged turn as a transition album, which I’m game for.

With a little bit of jazz and blues, they manage to make a refreshing arrangement for Es por Ti, that’s possibly one of the strongest tracks on the album — giving us a peek at possible things to come in his future discography — as well as his duet with Brasil’s Paula Fernandes. The other duet on the show was in charge of Spain’s Joaquin Sabina and the lyrical showtuney track, Azul Sabina, that says:

Remember to forget me
(never of me)
Don’t let the future rust you over
(the future)
Don’t count the Rosary’s beads
of a corsair’s with no pedigree.
Don’t say “no” just because.

When you want to escape
in Peter Pan’s ship
to Robinson’s beach
with a verse and an accordion.

The biggest, and maybe most surprising turn in style, is the closing track Odio por Amor (Hate for Love). Part pop rock song with classical and choral elements that’s just really uplifting and a great note to finish the album. The lyrics of the song seem a little uneven, beginning with a very relatable, “We work hard like two locomotive at maximum speed, and we forget that love is stronger than the pain that poisons the heart. We are victims of our own dumb creation, and we forget that love is stronger than the hurt within,” but then there’s a line that says, “I want to be with you, love.” Totally unrelated topics.

Overall, this is pretty much Juanes regular fare, opening the window to a brand new style for him.

Preview on Xiami.com | Like it? Buy the album on Amazon.com | iTunes: Regular + Deluxe