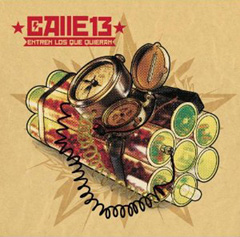 Since the beginning of their career, Calle 13 has always been known for their “in your face”, scandalous and raw lyrics. Nothing has changed since then as this album brought about controversy regarding lyrics on the track Digo Lo Que Pienso (I Say What I Think), where they mention a mayor who does drugs, no mention of name. And, of course, as incredibly ‘smart’ as most politicians are, the alluded to mayor threw himself under the bus.

Digo Lo Que Pienso is one of three tracks that I believe are the crown jewels of this album, the other two being La Bala (The Bullet) and Latinoamérica (Latin America). Digo Lo Que Pienso is but a proclamation from lyricist René Pérez about how he sings to tell the truth no matter how much it may hurt. Latinoamérica is a beautiful first person point of view narrative describing the many things that Latin America is. La Bala, though, is by far the most worthy song of this album. Calle 13 explains in poetic detail how a bullet’s trajectory, starting with the trigger all the way to the hit, makes our society decay.

After you hear these three tracks you’ve gotten the gist of it. But to those of you who have never heard Calle 13, prepare yourselves for the oddest urban style of music you’ve ever heard. Their music is a widespread fusion of all things Latin American, music from merengue to salsa to traditional South American instruments, all over a base of steady rhythm hip-hop. If you dig this, then be prepared to be schooled on social morals ;D

Preview and/or buy the album on Amazon.com