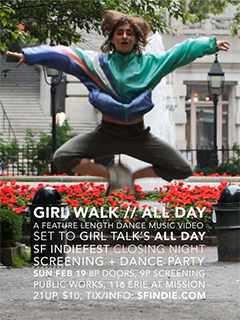 As if Wim Wenders’ documentary Pina didn’t bring forth just how fascinating dance is to audience’s attention recently, Jacob Krupnick reinforces that idea by delivering an immensely entertaining musical film.

Entirely guided by the Girl Talk album All Day, the dance film Girl Walk // All Day follows three dancers across New York City. The Girl bursts out of her dull ballet class by dancing into a world that’s full of life and new experiences. The Creep finds himself traversing New York and eventually following The Girl around. The Gentleman stumbles into The Girl and a romance of sorts between them begins to unfold.

While it’s certainly a loose story that doesn’t necessarily even matter all that much to the movie, it’s still a fun one to watch unfold. The collision of dance styles — be that ballet or hip hop — set against dozens of songs mashed together fills us, the audience, with the urge to get up and dance. Whether that can be attributed to Girl Talk’s intoxicating mixes or just the sheer fact that everyone on screen is having a blast is impossible to decide, but either way, it makes for a great time.

Let’s be real, who wouldn’t want to let loose in New York City and just have a wild, fun time? That’s exactly what this film does. Stuffed full of familiar locations and confused glances from onlookers, it’s easy to see that Girl Walk // All Day was shot guerrilla-style all throughout New York City. Some impressively fluid camera work and a few great tracking shots — notably one on the Staten Island ferry — continues to prove just how well dance can be mixed into cinema.

While it’s plenty of fun watching both Dai Omiya and John Doyle dance on their own or with each other, as well as the collection of other dancers like the pole dancer on the subway, the truth is that this film is all about The Girl: Anne Marsen. It’s impossible to watch Marsen dance her way through shops, boats, subways, and streets without smiling. Her interactions with other characters and innocent bystanders are just as amusing as her dance moves. There are no words needed to to show how much dance and music means to her character and how much influence it can have on everyone around her.

Even in bad times one can usually find something fun in life and Girl Walk // All Day shows just how great dance can make you feel sometimes and how it can bring the world together. Sure, it’s technically one big music video, but it’s still one of the most entertaining things put out all year.