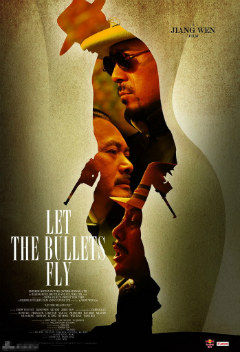 There’s just something about Asian-flavored Westerns, just ask anyone who liked Kung Fu Hustle and The Good, the Bad, the Weird — two prime examples of this.

China’s biggest box office hit of 2010 is no different. Let the Bullets Fly is a hard-hitting Western with a lot of Chinese flavor, telling the story of notorious bandit “Pocky” Zhang (Wen Jiang) as he’s about to pull a heist on a train where Goose Town’s new governor, Bangde Ma (You Ge), his wife (Carina Lau), and counselor are celebrating the new job.

When Ma and his wife get captured by Pocky’s bandit crew, Ma pretends to be the governor’s counselor, and lets his wife pretend she’s a widow, as they all set out to Goose Town to get some money, where they meet the tyrant Goose Town godfather, Mr. Huang (Chow Yun-Fat).

Besides the shoot-em-up scenes, the violence, the blood splattering, and some bits of explosion, Let the Bullets Fly is all about humor. You Ge pulls of a transformation into the poor but hilariously double-faced Governor Ma — I didn’t recognize him! — while Chow Yun-Fat hits all the right notes in his campy tyrant Mr. Huang (as well as his comical decoy). It is, however, Wen Jiang’s role as bandit Pocky Zhang that brings the story together. His work is campy without being too irrational, he plays a Robin-Hood type, without being really a hero, he’s playful and can get straight to the point.

The action sequences are entertaining, and the violence is not really too graphic — we’re not in Korean vengeance film territory yet. The film has great costumes, and decent special effects — except when the train crashed in the water, that was pretty bad. The humor is pretty easy to get, except when it gets pretty dark — the only problem would seem getting all that “Chinese humor” that might get lost in the subtitles… or even worse, a dubbed version.

I have no idea how Hollywood is planning a remake without losing what makes Let the Bullets Fly uniquely Chinese. I fear it may just turn out to be just a western, and that’d be a shame.