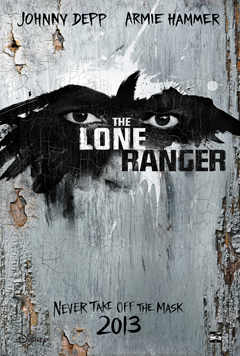 I actually had little to no preconceptions of The Lone Ranger — I didn’t grow up watching it, and I’m partial to whatever Verbinski’s done for the screen… though, I admit that I found the first Pirates of the Caribbean movie surprisingly good (I saw it by accident… at the cinema), and The Ring was pretty decent. I was weary of some of the race issues [1] arising from casting Johnny Depp as Tonto, and became even more indifferent when it became the second lackluster of the summer season no only in numbers, but also in critics’ opinions.

Shockingly, though, I didn’t hate it. I was genuinely kind of surprised by some of the elements displayed on the film, but I see what elements might be ticking people off.

This version of The Lone Ranger puts Tonto (painted face and kinda chunky Johnny Depp) in the center of the whole story, relegating the Lone Ranger (Hammer) to sidekick position — minus one for TLR hardcore fans. But it really worked for me, since westerns generally bore me and I do kind of forgive Depp for almost everything. It starts out in the 1930s with a boy looking at a Midwest exhibit of stuffed buffaloes and… possibly a stuffed “Noble Savage” that magically becomes alive to reveal his name is Tonto… in old age. All of a sudden we’re transported to the 1860s where everything took place, as Tonto is being transported as a prisoner next to the bloodthirsty Butch Cavendish (Fichtner), who is on his way to be executed for his crimes.

The train they’re riding is about to be raided by Cavendish’s lackeys to set him free, but they’re not counting with the presence of the new town’s lawyer, John Reid before he becomes the Lone Ranger, who happens to not believe in the power of weapons, instead trusting the law and believing justice to work. When Cavendish manages to escape, John and his brother, Dan (James Badge Dale) the Ranger, alongside his team set out on a search until they’re ambushed and killed with Cavendish — in an act of cold evilness that I thought was weird to see on a Disney flick — takes Dan’s heart and eats it.

Believed to be dead, John… with the aid of Tonto… is reborn as the Lone Ranger.

I’m going to tell you what I think doesn’t work with The Lone Ranger: the pacing is weird. At a moment we’re all slapstick comedy with Depp doing Captain Jack with heavier makeup on and naked torso, and the next we could see a reflection of Cavendish eating John Reid’s brother’s heart. It’s not graphic, but it gives you enough of a picture to send chills down your spine. We are then mocking the ineptitude of John Reid trying to embody the Lone Ranger, and switch to an action scene that’s interrupted by the 1930s story because the kid is as incredulous as some of the audience may be.

Look, I’m all for wacky genres mixtures, especially if they end up like The Good, The Bad, The Weird or Let the Bullets Fly, which are predominantly set on a western setting; however, it feels like Verbinski wasn’t entirely sure what type of film he was making, and at times I think he wanted to make a proper grown-up movie with the inclusion of  Helena Bonham Carter’s character as a Madame. A Madame (!!!) that shows you her ivory leg ready to kill when you press the button. I’m sure that with music done by Jack White, it would’ve been a different experience. Zimmer is always an apt choice as a composer, but makes The Lone Ranger too serious of a summer blockbuster, which matched some of the themes shown in the film. I was surprised at how badly painted “white men” were, which is one of my first experiences in my popcorn entertainment.

So there, The Lone Ranger doesn’t suck. It’s just a lot of people hate it from different sides. People that hate it for switching the focus to Tonto, people who hated that Depp was chosen as Tonto, people that thought this film was too graphic for a Disney flick, people that claim the story is filled with White Guilt, etc. For all its bad elements, it makes up with others. And the train chase is a lot of fun.

Note: Interesting to note that the name of Tonto has always been changed in the Spanish Latino dub to “Toro” — which makes sense, because “tonto” means “dumb” and it was one of the reasons I was weary with the news of “stereotypical native american” representation.