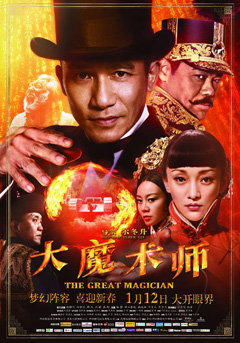 When they announced The Great Magician was going to be about a magician and a powerful man fighting for the same woman, it sounded more like a sketchy version of The Illusionist — you know, the version with Edward Norton, Paul Giamatti, and Jessica Biel.

Boy, can marketing be misleading~

The Great Magician is, above all, a comedy that entwines some mild fantasy and romance within an historical setting — the Japanese are in China, and they are using Bully Lei (Lau) as their puppet. Painted as incredibly dumb and an oppressor, Bully Lei only lives for one thing: the non-reciprocal love of his seventh wife, Yin (Zhou), a feisty, some would say, Katherine “the shrew” type of woman.

Yin lives for one thing as well: Magic. So it happens that the only magician in town (Alex Fong) is incredibly dull, but things are shaken when Chang Hsien (Leung) arrives. Having traveled around Europe, Chang Hsien is eager to start working right away on his show alongside his aides, a group of people that are more intent in overthrowing Bully Lei’s, well… bullying rule.

Sounds like the makings of a serious period piece with some magic involved, huh? The Great Magician really throws everything on its ground and gives you a completely fresh take on what you thought you would get. The movie is definitely more Let the Bullets Fly than… let’s say, Lust, Caution or Red Cliff.

I have the feeling that Tony Leung was more like his usual self. Though we’re supposed to root for Chang Hsien at a point in the story, The Great Magician turns the tables on us and make us quite sympathetic to the supposed tyrant with the heart of gold! In here, it is actor Ching Wang Lau who gets to shine playing the often hilarious Bully Lei. But I guess I’d better stop spoiling the film, huh?

During the course of the nearly two hours of running time, writer/director Derek Yee gives us all bits and pieces of the story to give his characters some sort of background, and though we end up even learning about Bully Lei’s right hand, Kunshan (Gang Wu), and Lei’s third wife (Ni Yan), The Great Magician ultimately feels like a character arc for Bully himself. Accident or just really great acting?

The climax of the film is also quite refreshing and quite unexpected, but I’ll let you watch the movie and focus on Zhou Xun’s character’s realization for that.

Overall, The Great Magician turns out to be a really great piece of entertainment — pure entertainment, with some laugh out loud moments included. But if you were expecting some serious piece of cinema, you might be a little pissed off at the film. You’ve been warned.