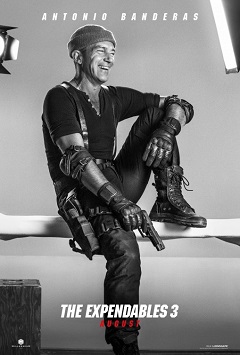 It’s undeniable that The Expendables franchise has not only brought back action stars from the past and put them in the spotlight once again, but in some cases some of the actors felt relevant to watch again. I didn’t enjoy the first film much because it took itself too seriously and its story was kind of boring. However, The Expendables 2 was a far superior (and enjoyable) film for actually embracing its characters and having a slightly better story with more comedy and better action scenes attached to it.

The third entry begins with Barney Ross (Stallone) rescuing former Expendables team member, Dr. Death (Snipes) — an specialist in knives and medicine — in order to assist him and his crew in intercepting a shipment of bombs meant to be delivered to a warlord in Somalia. Unfortunately for Barney, the mission didn’t go according to plan: Caesar (Crews) ends up severely injured and the Expendables are forced to retreat. But what’s even worse, the warlord turned out to be someone Barney believed to be dead… until now.

Conrad Stonebanks (Gibson), a co-founder of the Expendables who later betrayed his team to make profit out of illegal weapons selling, successfully escapes and this leads Barney (and the film as well) into a different approach to take down Stonebanks before it’s too late.

The Expendables 3 heads into “new school versus old school” mode, which explains the selection (via Kelsey Grammer’s character) of the recent Expendables roster — ex-Marine Smilee (Lutz), nightclub bouncer Luna (Rousey), computer expert Thron (Powell) and weapons expert Mars (Ortiz) — and provides tension and discomfort among Barney’s pals, in particular with Christmas (Statham), who was already having issues with Dr. Death earlier in the film. Despite this being interesting in theory, it wasn’t well executed because the writing for the younger cast members was pretty uneven and they weren’t funny or interesting to watch despite being capable of kicking ass. However, the film also includes Antonio Banderas as Galgo, who was easily the film’s MVP by a long shot.

At first, Galgo tried to pass off as a younger mercenary in order for Barney to recruit him, but Barney ignored him. However, when things take a turn for the worst, Galgo gets accepted and the film actually becomes fun to watch when he’s around. Banderas’ performance is really great and hilarious in a way that Galgo works pretty much a human version of Puss in Boots, sort of.

In terms of the film’s expectations, there’s the usual action scenes and lots of explosions alongside the basic storytelling and character development showcasing everyone as BAMFs. However, The Expendables 3 lacks the humor touches and stronger/funnier self-depreciation elements that The Expendables 2 had which made it a surprisingly enjoyable film.

Extra quarter star for The Expendables 3 thanks to Banderas, who made this film watchable. But I must say that the only moments that may surpass his comedy spots involved a device that becomes important in the final action scene and a karaoke scene near the end of the film.