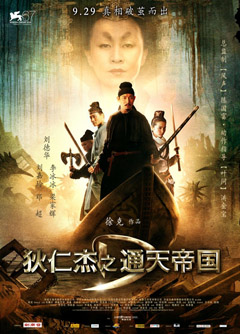 There’s really something surprising about watching a film with fantasy tones from a culture that you’re not really all that familiar with. It may take a little suspense of disbelief from its audience, or it might ruin your experience.

It worked for me, I was in for the ride!

Detective Dee sets us in ancient China, when Empress Wu Zetian (C.Lau) is about to be officially named empress after years of prosperity — the empire’s been rid of corruption and everyone is rich — despite other officials who aren’t up with the idea of being ruled by a woman… or so says the Empress.

For her coronation, a gigantic statue of Buddha is being built that can oversee the kingdom. During the final construction details, an inspector suddenly burst into flames. When this incident and a following sudden human combustion are blamed to divine intervention, the Empress puts Detective Dee (A.Lau) on the case. Once upon a time, a dissident against Empress Wu Zetian’s rise to power, he will be onto the mysterious case alongside the Empress Chaplain, Jing’er (Li).

While Detective Dee is inherently a mystery (so says the complete title), the film contains some very big action sequences and fights — coordinated by the awesome Sammo Hung. While there is space to worry about who did it, the film also points out the whys, and most importantly the hows. In a fantasy film, the hows can take you anywhere from shape-shifting faces due to acupressure points, Gods in sabbaticals, iffy bug juice, not to mention something that would make people sudden burst into flame– that would make an interesting CSI episode with Grissom, wouldn’t you say?

Lau is his usual charming self with hints of cockiness… because, well, he’s Detective Dee — he’s perfect. He’s righteous, has a straight moral compass, and even though he was incarcerated for opposing the Empress, he doesn’t really begrudge her. I’m sure there’s a political lesson to be learned there somewhere, considering the ending and WHO turned out to be the culprit.

Ideologies aside, one of the best things in the film has to be the the art direction, and most importantly the costume design… at least for the one who had to dress up Carina Lau as an Empress. She was regal in her attire, commanding, and… can I just say it? A bit ruthless? It’s like the Empress formed a triad with Detective Dee and Jing’er, the three playing different spectrum of the human condition but trying to make it work as one. Each is a bit suspicious of the other, and it just adds a little something to the mystery part of the film.

Then again, Detective Dee is just a blockbuster film, it’s a pretty fresh and exciting one at that but it’s not an arthouse film. It would be amazing if the film had the chance to open in theaters for the masses (not just for those of us who like Kung Fu films or Hong Kong action flicks), though there are those “annoying” subtitles. It’d be amazing if the American public would be open-minded enough to watch a subtitled blockbuster — but what about all those action sequences! Won’t you miss them with subtitles? No, if other audiences can watch Hollywood blockbusters with subtitles,  so can you.