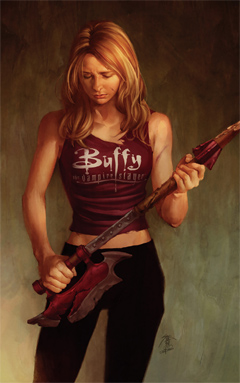 It’s been nearly ten years since the last episode of Buffy the Vampire Slayer was broadcast on television, but that doesn’t mean Buffy Summers and the Scooby gang haven’t kept busy, not only fighting demons, but also the government. With a crossover from the small screen to the printed page, this new medium also provides the chances to explore wacky and outrageous storylines that would probably break anyone’s television budget.

The eighth season of everyone’s favorite vampire slayer began, running for 40 issues of 25 or so pages — or 8 main story arcs — that would have literally not been possible on television (since it took about 4 years to print). The rest is familiar territory, quick pop culture references that may show the Scoobies’ not being high school kids any longer, monologues, life or death decisions, impending doom, and Buffy Summers and everyone else’s love life entanglements. Yes, welcome once again to the world of Joss Whedon, except — Toto, I’ve a feeling we’re not in Sunnydale anymore.

The season begins with the first arc, The Long Way Home (001-004), setting up how the world is working after the release of the Slayer power onto every young woman that could have been the Chosen One — oops! Season 7 spoiler? Get over it, it’s been ten years since that. At the moment, there are at least 1800 active Slayers, 500 of whom work with the Scoobies… which now, of course, look more like an organized Slayers squad than a group of teenagers trying to get by. Fancy equipment and a Wicca squad help protect this massive group who are trying to make this world a better place for us to live. Ethan Rayne (Giles’ favorite frenemy), Amy Madison (a.k.a. The Rat) and Warren Mears (who ended up like a skinless chicken after pissing off DarkWillow) start setting in motion the turning grinds of what we will later know as Twilight, a government-sponsored military group set to eliminate all the magic in the world with the help of a mysterious masked Evil.

In the meantime, on No Future for You (006-009), Faith gets a mysterious assignment from Giles, and finds a rogue Slayer who’s trying to kill Buffy. Upon the reevaluation of her own dark past — with even an appearance from the Mayor, you know you miss him — Faith decides to help other slayers who might be lost, while becoming one of Giles’ most trusted assets. While a group of mystic werewolves are after the Scythe on Wolves at the Gate (012-015), Buffy finds herself traveling to the future in a crossover issue with Whedon’s Fray in Time of Your Life (016-019).

In the fifth arc, Predators and Prey, we begin a cultural shift — maybe or not started by the Twilight Craze — in which we humans begin having a closer interaction with vampires comically shown when sunny Californian vampire Harmony Kendall is back looking for a big break in the world of MTV’s reality television. There’s even a special appearance of CNN’s Silver Fox, Anderson Cooper, interviewing her and posing a very interesting question — “They say they’re our protectors, as fighters in some grand battle against ‘evil,’ but who decides what is evil? And, some are asking who protects us from them?”

All hell finally hits the breaking point as secrets are revealed, problems confronted  and the hunters become the hunted as the Slayer population go into hiding as Twilight closes in on them and the secrets of the universe unravel.

The themes explored on this season of Buffy is customary Buffyverse elements — formidable circumstances demand quick, but very necessary, responses that all lay on top of our heroine’s shoulders… as good or bad those decisions could have been. We always know that Buffy will be able to take it all, the good, even if brief moments, with the usual hoards of bad that plague her life.

The art in Buffy never reaches graphic novel territory, sometimes looking like basic panels of pure dialogue… except for those stunning covers (like the one we’re using on this post), but props to all artists involved for actually making the characters pretty similar to their live-action counterparts. It really brings back all those memories of the Buffyverse back to life.