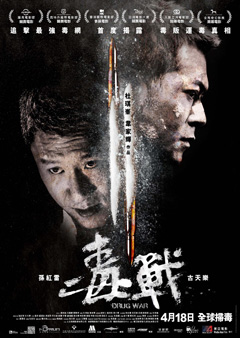 Chinese films have been breaking a lot of box office records for the past two years, and the trend continues this year with the success of films like Finding Mr. Right, So Young, as well as Johnnie To’s action crime Drug War of an estimated budget of $16M USD that recoup that on its first week in Chinese cinemas [1][2][3]. The film also brings Johnnie To back to form in the crime genre, this time breaking taboos in the Mainland [1] by bringing action, drugs and killing into a setting that you’re unlikely to see very often in Mainland-based films.

Better yet- it’s LOADS of fun. The classic tale of cat and mouse, except the cat’s already caught the mouse. If you have any idea about China, you’d know that dealing with drugs in the country is the riskiest thing you could ever be caught in, since it means death. That’s what happens when Captain Zhang Lei (Sun) busts a bus full of mules and then finds Timmy Choi (Koo), who’s the head of the operation. However, Choi is willing to cooperate and is ready to help the Anti-drug squad bust a deal he was about to close just to spare his own life.

Though Drug War is incredibly conventional, it never stops entertaining. Louis Koo sells the charming scumbag looking for some of redemption in a way that you cheer when he gets his way and cheer when he doesn’t. Choi is neither heartlessly evil nor made the victim of the system, he’s a survivor and he is incredibly human. That’s in contrast to Sun Honglei’s character, he’s your archetype good guy- without much fault, which makes Zhang a little bit boring as a person, but works efficiently for this story in particular. Sun is fun and effective, he sells you his hero qualities in the opening sequence as he leaps forward in cowboy get-up to catch those mules runaways.

The problem with ensemble casts is that is hard for characters to build up in any way, and this is the same problem that Drug War has- it doesn’t have any. In fact, despite being familiar with actors names, their characters sort of mesh together blending into it, servicing the storytelling instead of themselves. It’s great fun, but of little consistency. Pop-corn entertainment doesn’t get better than that, right? Well directed, well-paced and blood-pumping, Drug War will leave you on the edge of your seat. Especially by the end.

My only qualm is… little kids CRY when crap happens around them. Heck, little kids make a LOT of noise in normal situations, so when the sound of children was muted during THAT scene, it was totally unconvincing.

You can get Johnnie To’s Drug War on YesAsia with English subtitles on R3 DVD or A Bluray.