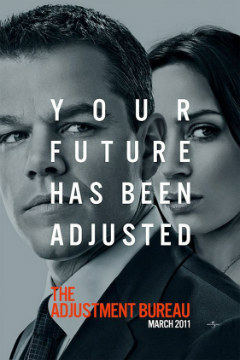 Dear, Emily Blunt — I have a bone to pick with you. You’re making me regret ever putting you on my #1 spot of actresses to watch.

The Adjustment Bureau has a very neat concept, it’s about a special “bureau” that’s in charged of seeing things running smoothly, and “adjusting” things to set other things in motion… without us noticing it. Everyone’s going to be running off to get one of those hats, and there will probably be people dressed up as them for Halloween.

Besides that, The Adjustment Bureau is also a love story of a couple, literally, being put together and torn apart by destiny. This should be my kind of movie, I’m a sucker for them, but alas… it just didn’t work.

It all starts when David (Damon) runs for a seat in the US Senate, he’s charismatic, and has a great team behind him that tell him what to wear and how much his shoes should shine. But as things in politics go, everything collapses when a few days ahead of the election, his stupid past comes to ruin his party. On the day of his defeat, he meets Elise (Blunt) who inspires his saving defeat-speech.

Then, the fateful date the Bureau doesn’t pull of a clean job, David meets Elise on a chance bus encounter that will set all sorts of chaos into David’s life.

The film sets itself with a promising start, Damon’s David is likable enough to make us believe he could be running for some public job, and Emily’s Elise is charming and playful. But this is not really a true love story, a love story is supposed to be about two people. In The Adjustment Bureau, it’s only about David, it’s about him and Elise is just an accessory that he desires to be with.

Halfway through the film, David only seems into Elise just because the others are telling him that he’s not supposed to. We never know whether Elise wants to be with David just because she feels her ex wasn’t as passionate as David — which David was because of all the “you’re not supposed to be with her” business. But I was into it, I still thought David was an idiot by then, and that the characters were poorly developed but I was into the movie… I could have given this a three-star rating easily. But it all had to fall apart with the ending, which felt… anticlimactic. “Okay! You got me now! We got no more floors to go up to! You win, you really love each other, so I’m going to let it be.”

That was some pretty cool door switching, though.