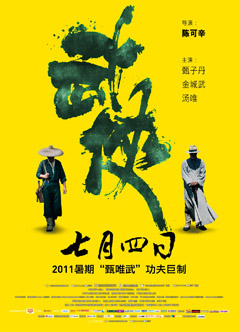 What you see may not be exactly what has happened.

In the much talked about Wu Xia — which is being called Dragon on IMDb for some reason — the now ever-present-in-any-respectable-martial-arts-film, Donnie Yen, plays simpleton paper-maker, Liu Jin-xi, who lives in a remote village post-Qing Dinasty.

When a duo of bandits intend to rob a general store, poor Liu Jin-xi is forced to clumsily intervene, resulting in both of the bandits’ deaths. Turned into a local hero, Liu Jin-xi’s deeds don’t go unnoticed when detective Xu Bai-jiu (Kaneshiro) is called on the scene.

Suspecting that Jin-xi is more than just a simple paper-maker, the detective begins snooping around town and inside Jin-xi’s family. Turns out that even his loving wife, Ayu (Tang), knows little about her husband.

Wu Xia infuses the martial arts genre with fresh air, something that has been attributed to Donnie Yen for the past couple of years with every film he’s released — anyone who’s seen or heard of Ip Man knows what I’m talking about. But Yen’s influence is felt most effectively here. At 48-years-old, Yen is possibly the hottest action star out there. No matter how unbelievable something can seem, his power is literally so great that you have no other option but to swallow it all up.

However, Wu Xia is more than just a mere action flick, combining CSI-esque sequences — in which the ever-intellectual Takeshi Kaneshiro explains to us what really happened in those fights. What we actually get is double the fights, but with two completely different perspectives.

Kaneshiro’s detective gives the film its antagonist until the last act. He is intent on not believing a single word of Liu Jin-xi’s explanation. Then detective Xu takes it too far. There’s actually a lot of comedy in this drama — the scene where Xu really thinks Liu’s chi is so powerful that it even keeps the flies away. All of a sudden, Liu has a machete in his back. WHO DOES THAT? Complete dark comedy elements right there.

I was a little disappointed in Tang Wei’s role, however. If only she hadn’t played the part — it could have been anyone else. There are only a few actresses in China that command the screen — one of them is Gong Li, who even against a mega star like Andy Lau in What Women Want can hold her own spotlight. I think much of Tang’s career has suffered from the ban that occurred after Lust, Caution. I think it’s going to take a couple of years until she finally gets a role as high profile as that one.

Until then… indies and small roles will have to do.

Overall, Wu Xia has great elements that don’t necessarily combine well. There may be too much drama for action lovers, and there’s not enough drama for drama lovers. However, if you love your films with bits of different genres here and there, Wu Xia may be a surprising winning combo.