Good, The Bad, The Weird, The 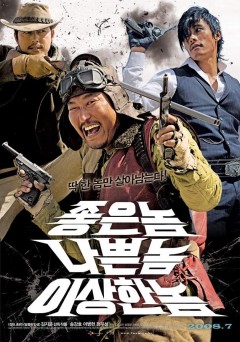 Kang-Ho Song plays “The Weird”  Tae-Goo Yoon, a goofy man who appears to blunder about, surviving merely by luck. Tae-Goo happens upon a map that appears to lead to a great treasure, the only problem is that Chang-Yi Park “The Bad” (Lee) was already on a mission to find the map. “The Good” Do-Won Park (Jung) gets into the mix on the train trying to capture both of the men for the bounties on their heads.

Chang-Yi chases Tae-Goo, while Do-Won chases both and then things spin around and around, until the audience isn’t quite sure who to follow and root for anymore.

I was fortunate enough to see this movie at the theater with a friend who was kind enough to go along with me. Ten minutes into the movie, I turned to her and said, “Are you having as much fun as I am?!” She nodded big and smiled.

That’s the feeling that you get with The Good, The Bad, The Weird. It’s an exciting romp through 1930’s Asia, and I love seeing the great mix of Korean, Chinese, and Japanese costumes and hearing all three languages, as if all of my fanbases were coming together just for me.

Ji-Woon Kim has a way of getting the most out of his actors. They all admitted they had been wanting to work with each other and felt fortunate to have been able to make this movie together, but that they were exhausted after working in the sand-storm swept deserts of China.

In all, this movie takes a simple plot — three men, all after the same thing chasing one another — and makes it interesting and entertaining. If you’re looking for a film without any romantic entanglements that will ensure you a good time — this is a must-see.