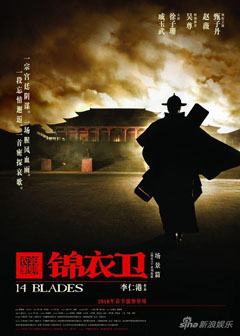 Set during the late Ming Dynasty, 14 Blades tells the story of Jinyi Wei – a secret group of guardians trained in clandestine combat to ensure the peace and stability within the empire – agent named Qinglong (Donnie Yen). Qinglong is betrayed and hunted by the people he works for and his colleagues, as corrupted eunuchs and exiled Prince Qing are plotting to usurp state power from the reigning emperor.

We’ve come to a point where Chinese and Hong Kong productions can’t screw up how a period epic looks. It happened with Three Kingdoms, The Warlords, Red Cliff, and it happened here. In 14 Blades, however, they decided to lean more towards the action adventure thriller than the dramatic epic. It shows in the characters, and it shows in the way the action choreography worked.

Joining Donnie Yen in this action adventure there’s actress Zhao Wei, playing the un-married daughter of the owner of the Escort Agency Yen’s character hires for protection, who begins to fall for him, as well as idol Wu Chun in the role of a cool-looking desert bandit – who reminded me of Jack Sparrow. The biggest threat to ass-kicking Qinglong is Tuotuo, the goddaughter of Prince Qing and a highly-skilled fighter.

There is very little window for bad acting with so much going on in the film, but the wire-work in most of the fighting sequences was more than a little turn-off. After all, Donnie Yen did kick ass without wires in the Ip Man movies.