Art of Getting By, The 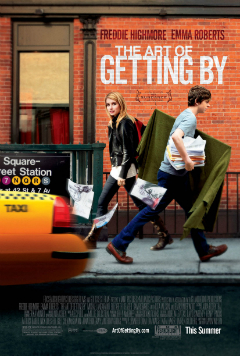 So, there are a few things to mention when talking about The Art of Getting By, the first thing being Freddie Highmore. Most remember him as Peter Davies in Finding Neverland. Next to Freddie Highmore, we have Emma Roberts — Julia Roberts’ niece, who I’ve found to be less than memorable in most of her parts — and after her, there is Sasha Spielberg (Sasha is Steven Spielberg’s daughter). This interesting array of young actors beautifully complements an interesting coming-of-age romance.

While George is dealing with his “allergic reaction” to hormones, he is also struggling to graduate. George’s existential crisis conveniently hits him when it matters most and all of his work and art seems meaningless. He cannot find inspiration for drawing and he cannot seem to pull it together to finish up his schoolwork before the end of the year. On top of that, his parents are on the brink of divorce because his stepfather can’t seem to get the bills paid.

Sally’s mom is sort of a harlot and alcoholic that sort of drifts from man to man. Although it is clear that Sally is trying to break away from this, the indecisive qualities of her mother definitely transfer and Sally suffers from the consequences in her relationship with George.

I didn’t expect to this film to impress me as much as it did and it was indeed on the brink of living up to my low standards. In the beginning, Highmore’s character George is hard to take seriously. His angst-ridden artistic type is over-exaggerated beyond all necessary means in the first 10 minutes. It took a lot for me to keep from rolling my eyes. The good thing about the movie though, was that it always managed to save itself right before I as I was beginning to think “Oh, brother.” It’s like a really terrible musical that cuts off the beginning of yet another song and substitutes it with speech.

Emma Roberts’ Sally definitely had to work to get to the depth that she achieved by the end of the film. For a while she came off as the girl-next-door-that’s-hard-to-get type but she wasn’t actually hard to get. She was basically the popular party-girl that swoons over the dark and artsy George (and I could totally relate to that).

They quickly became best friends but the sexual and romantic tensions were high. Sally says to a mutual friend of theirs that she and George are just friends. Dustin (Angarano), the friend, hits the nail on the head when he says that “there is no such thing”. From there, George and Sally have to grow up and figure out how to face the fact that they’re in love.

This is not to say that the movie was wholly predictable but I’m also not saying that it wasn’t. It used the predictable elements in a non-conventional way. After all, these are New York City high schoolers and not your run-of-the-mill suburban neighborhood crew. Their parties were at high-end clubs and they met at bars because they all had fake IDs. So it was a refreshing twist on the teen films that we’re used to seeing nowadays.

I will say that the cursing in this move stuck out to me like a sore thumb. It felt like everyone was uncomfortable cursing and the obvious nature of that discomfort made me want to laugh. This was true for everyone except for the art teacher (played by Jarlath Conroy who most recently played the undertaker in True Grit). His lines are fairly creative and were often followed with the most laughter.

The Art of Getting By is a very special film that is heartwarming in a believable way. Maybe it wasn’t Blue Valentine realistic or even (500) Days of Summer realistic but it was satisfying in its own way and it had a pretty kick-ass indie rock soundtrack to go with it.

It will be released on June 17th in the US, September 23rd in the UK, and October 27th in Germany.