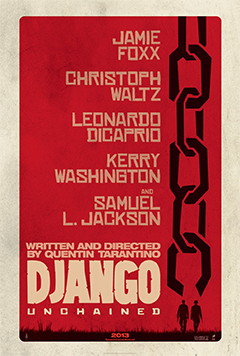 Retelling history is one of the perks of being a filmmaker, and after the successful film Inglourious Basterds, Quentin Tarantino is back with another one. Hitting hard with an antebellum-era spaghetti western, Django Unchained is arguably one of Tarantino’s wildest and most entertaining films.

Setting aside the abundant plots and side stories that fill his former films, Tarantino gets straight to the point in Django Unchained. Dr. King Schultz (Waltz), a bounty hunter on the hunt for three wanted men, buys and frees a slave named Django (Foxx). With Django at his side, King can identify and capture his bounty, but not without agreeing to help the former slave rescue his wife Broomhilda (Washington) from dangerous plantation owner Calvin Candie (DiCaprio).

Django Unchained shows a lot of love for classic films, especially Sergio Corbucci’s spaghetti westerns and good old exploitation films, and it’s no surprise with Tarantino at the helm. Tackling slavery head on is a ballsy move and one that certainly pays off. Compared to Spielberg’s Lincoln that shies away from actually addressing slavery, Django dives right into the heart of the days when slavery was all that and a bag of chips, and it’s just as terrifying as it is hilariously entertaining.

The terrifying comes in small doses throughout this epic tale. While the violence can sometimes be a thrill ride, the brutality of other scenes — whipping and bare-knuckle fighting among others — can be felt right down to the bone. The subtlety of some, though, is still harrowing, as we hear a man torn apart by dogs and see the splash of blood against cotton. Even Kerry Washington’s limited damsel in distress role, a surprise coming from a writer whose female characters usually impress, provides a close look at the harsh life of a slave.

Yet nothing is quite as shocking as the roles that Leonardo DiCaprio and Samuel Jackson take on here. Amidst the liberal use of the n-word that has people up in a buzz, it’s impressive to see them both dive into these unlikable roles that have both comedy and fear laced into them. Sam Jackson is goddamn terrifying at times and one can only hope to see DiCaprio play a bonkers mustache-twirling, hammer-wielding villain again.

A stark contrast to all this dark slavery business is the sheer delight brought on by some of the western-inspired scenes, along with some genius comedic writing from Tarantino. The witty banter between Foxx and Waltz, including an almost touching telling of the German legend of Brunhilde by King to Django, was wonderful to watch. Having Jamie Foxx burst into a room to Tupac and James Brown shooting the place up was just as magnificent, and I’ll be damned if I wasn’t smiling every time the film exploded into a riveting bloodbath in that Kill Bill style we remember so fondly.

There are enough films around that yell at people about how bad slavery was, but Quentin Tarantino flips them all off and places the gun in the hand of a slave, delivering a delightfully thrilling spaghetti western revenge saga like no other.