Chef, the Actor, the Scoundrel, The 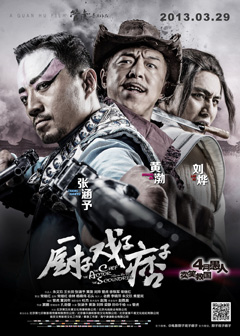 Mainland China comedies can be weird.

By its mere title, I thought I might be dealing with something near the quality of The Butcher, the Chef, and the Swordsman — an off-beat action comedy that people in China seem to love a bit. It certainly follows that weird vibe that Zhang Yimou’s A Woman, a Gun and a Noodle Shop had that not even I could learn to like, so I didn’t have much expectations for The Chef, the Actor, the Scoundrel — sans promotional material — other than a few good action sequences and jokes that could go over my head.

Boy was I wrong. I ended up loving it, and left honestly surprised. The Chef, the Actor, the Scoundrel is an often-times hyper-real period comedy with a western feel that transforms itself into a patriotic spy film during the Japanese invasion of China; a mish-mash of genres that wouldn’t necessarily go together but loved seeing here. Think of it as The Good, The Bad, The Weird meets Inglourious Basterds turns into The Message, that’s as close a description as you’ll get.

While the Japanese Army is testing biological weapons in the population, microbiologist Osagawara (Masanobu) is in charge of looking for a cure to a new mutation of the cholera epidemic that has hit the army, but his transport is taken by The Scoundrel (Huang) who’s looking for loot. Stranded at a Japanese-themed inn run by The Chef (Liu) and his mute wife (Liang), they must divide the mystery bounty with The Actor (Zhang) — who, I must add, talks in Beijing Opera style… so it might irk some.

Though performances might seem over-the-top for some, it’s actually pitch-perfect throughout. It strongly plays on the stereotype of the Mainland China bumpkin who’s uncultured, loud and coarse, as well as the street-smart money-hungry (or some say business savvy) trickster, and turns it around completely to the point of making it all a heroic adventure. The jokes seem silly, but they’re pretty dark when you realize you’d be laughing at someone being tortured… even if it’s fake torture. The only thing about the humor that I didn’t like was the three (quite blind) inept detectives.

Visually the film delivers- it was quick and it had that Ang Lee’s Hulk comic book panel editing that added to the bizarre of the film, despite some CGI problems like the freaking bird and the scene with the explosion, but it didn’t take away from the characters, whom you end up having a sort of patriotic connection with nonetheless.

I did end up extra confused with the final scene and look back to “the real people” of the story, so much in that I went online to try to look them up. LOL I mean, after Bernie I could believe anything.