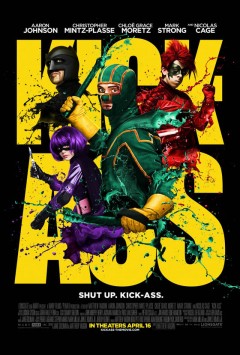 Have you ever wondered why nobody has decided to be a superhero in real life? That’s the question Dave Lizewski (Johnson) tries to answer in Kick-Ass, a superhero film based on the comic book of the same name by Mark Millar and John Romita, Jr., directed by Matthew Vaughn and co-produced by Brad Pitt.

The film tells the story of average teenager Dave Lizewski, who decides to become a superhero, dubbing himself Kick-Ass. Even though his intentions are very good, Kick-Ass gets mostly into trouble for his lack of training and powers to fight against crime. Eventually, he becomes a YouTube phenomenom after saving a person from a 3-on-1 assault, meeting Big Daddy (Nicholas Cage) and his daughter Hit-Girl (Chlöe Moretz), who plan to take down the evil drug lord Frank D’Amico (Mark Strong).

If you compare the film with the comic books, you could say the source is better, but that’s expected in an adaptation to the big screen, which is very good and easy enough to follow through and remains entertaining, despite the changes made for the film and the predictable feel it gives at times.

However, the real star of the film, and the main reason why this movie deserves to be called Kick-Ass, is Chlöe Moretz. She steals the show. Not only is her interpretation of Hit-Girl great, but she can also switch from cute little girl to deadly badass killer in the blink of an eye effortlessly. The scene where she labels a bunch of bad guys as c*nts, then proceeds to kill them all to the tune of the Banana Splits song from The Dickies is just bloody awesome.

All in all, Kick-Ass is violent enough to make Quentin Tarantino proud, incorrect for uptight people, has a good soundtrack, funny lines/scenes and it’s entertaining to watch. Go watch it if you really like violence, action and comedy. But if you prefer most of the mainstream stuff that today’s world offers, go watch Sex And The City 2 or wait for Eclipse.