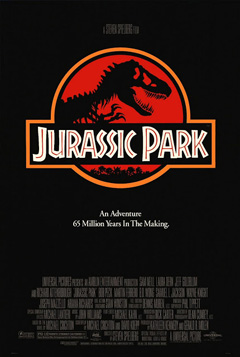 I remember the first time I watched Jurassic Park at the movies, I was tiny and I had a nightmare that featured not Velociraptors, but the T-Rex eye focusing on the car’s window. From then on, I wanted to be a paleontologist. I did so many papers on dinosaurs at school, and I even ended up going to The Lost World: Jurassic Park like three times (please, don’t hold that against me).

Of course, I ended up watching this movie every time it was on television — my cousin knows the Spanish Latino dub by heart, and I eventually bought myself the DVD and watched it a dozen times more. I was a little disheartened that I had to wait extra months for the re-release in 3D. But was it worth it?

For those of you, that for some wacky reason don’t know what the film is about, John Hammond (Attenborough) is a rich eccentric old man with a good heart that takes it upon himself to build an environmental park filled with dinosaurs. However, before he can continue, his park must get the approval of paleontologist Dr. Alan Grant (Neill), paleobotanist Dr. Ellie Sattler (Dern) and chaos theorist Dr. Ian Malcolm (Goldblum). During the weekend from hell, thanks to a tropical storm and the nerdy hand of Dennis Nedry (Knight), everything that could go wrong does go wrong, leaving the guests of the isolated island at the mercy of its wild and hungry hosts.

Though Jurassic Park falls into the trap of “exposition, exposition, exposition!” (what is a velociraptor? what is DNA? what is cloning? These are all heavy-handed questions for a 6-year-old); from the very moment they were mobilizing a raptor giving us a tiny preview of some delightful nighttime cinematography with a dash of gorgeous dinosaur sound design that will explode onto our pop cultural conscious with the now iconic release of the mighty T-Rex, there’s nothing boring about learning about dinosaurs and some funky science that would bring them back to life… unless you’re not into the brainy stuff that is. I don’t know ANY kids that have no interest in dinos, though!

What magic they are! From the moment you stepped into this world, as Dr. Grant sees the Brachiosaurus and we get our very first taste of the visual wonders we will be treated, which included the most awesome air pump sick Triceratops puppet. Though this segment is quite inconsequential to the going-ons of the story, and the Triceratops doesn’t do anything except for blinking and breathing heavily, it brings you the closest to these creatures. There’s nothing fake here, you can almost sense the texture of its skin… and if it had been in 4D, you’d feel the smell of nature and big piles of poop. It’s not a seamless mix of puppets and CGI, but it’s been able to hold up the passing of years quite well because of this.

Surprisingly, the upgrade in 3D visuals didn’t make better what I thought would be good perspective shots. The T-Rex chase scene is no king here, but the conniving velociraptors entering the Visitor Center’s kitchen are terrifying as they poked their heads and claws through rows of kitchenware. That’s when I noticed most of the people — all grown-ups — jumping from their seats. That’s how effective the conversion was in that sequence.

Overall, Jurassic Park is a staple of a bygone era in Hollywood, when you were able to dream that you had the world in the palm of your virtual hand (in a UNIX system), at the brink of a physical art world and the digital explosion that would inundate multiplexes worldwide for the next twenty years. We were all concerned on whether we could recreate things with CGI and cut down production prices, and we never stopped to think if we should. In any case, these prices have skyrocketed creating the overvalued blockbuster that’s sinking the industry.