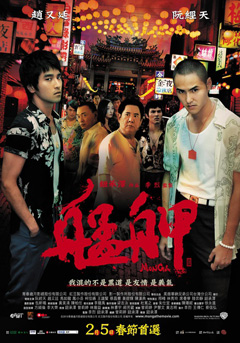 Monga was the name of a part of Taipei, now known as Wanhua District, the film tells the story of a group of Taiwan gangsters from the 80s that grow up in the zone with no other little illusion than to be part of a gang.

One of them is Mosquito (Chao), a guy who was constantly bullied at school until the day he runs into the gang of Little Dragon (Vaughan), the son of one of the most known bosses in town, and his young gang members Monkey (Tsai), A-po (Huang) and Monk (Ruan) — his right hand aid, and one of the most efficient members of the group.

Though Monga deals with the gritty world of gangs, violence, darkness, paybacks and backstabbing, it is a surprisingly light fare that puts a lot of emphasis in the bond created between the gang members, and the reason why many of them join one.

The  story starts with Mark Chao’s Mosquito, who does look a bit old to be playing a school kid, but acts innocent enough to understand why some of the other guys would pick on him. It all starts with a freaking chicken drumstick that Dog boy (Chen) takes away, when Monk and company — because Little Dragon is useless — notice Mosquito and his fighting/dodging abilities. After that, the guys seem like brothers… and fall apart almost like that too.

The acting is particularly strong from everyone, including both young leads. It seems that Ethan Ruan trained quite a bit to look that fit, most the young cast had to pull some very decent fighting scenes. The film, though violent, is nothing outrageous and even gives us some very stylish poetic blood splatters… which, okay, take you out of the movie a little bit, but felt like a nice touch at the end.

Monga also becomes more than just a gangster film with talks about families, mother-son relations, absent parents, and there’s even a semi-love interest with Chia-yen Ko’s character Ning, whom Mosquito establishes a sort of relationship with… that includes the overuse of Air Supply’s All Out of Love‘s cassette tape.

In the end, the film is sad without being too affecting. We’re connected to the characters, but we never feel one of them. We’re just watching this group of people go through what they’ve got in life. But it’s still worth a watch.