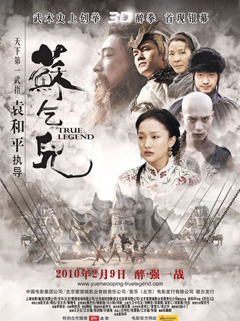 Leading an army to save the prince, general Su Can (Zhao) is an outstanding member of society. He is a great warrior, yet has the brains and peace of mind to never get into a fight without necessity. Yuan Ying (Zhou) and her brother Yuan Lie (On) were made orphans by Su Can’s father, but taken under his wing as if they were his children. While Yuan Ying and Su Can eventually fall in love with each other, which Yuan Lie doesn’t like. He wants to avenge their father’s death and recover what he believes to be his.

There’s an inherent problem with True Legend — it tries to do too much. The main issue is with the story structure, which makes the film too long and too fragmented, making it look like there are three different films. The beginning, which is rather simplistic in its tale of revenge, is fine — it sets the story into motion. But then True Legend turns into a self-discovery film, in which Zhao’s character trains his fighting skills with a Fighting God, an unmistakable Jay Chou, and a flying natural medicine martial artist-y doctor, Michelle Yeoh.

Once we go back to our revenge story and we think we’re done, the film continues with a Street Fighter/Mortal Kombat like tournament, in which the locals fight foreigners and don’t do too well. David Carradine, in his last film shot in China, one of his last of a few to be released, plays a cheating circus-like fighting coach that does everything he can to get those dirty Chinese — China against the world issues aside, this last arc is unnecessary, the film fares much better for about half the film. The action sequence are decent, the fights are dynamic… even if unbelievable- almost to be expected in martial art films, while the acting is decent. The art direction and cinematography is good, though standard Chinese fighting epic styled.

Though obviously presented in 3D, I cannot comment on it. While watching it I did wonder what it would have looked like… at least aspects of the film. Especially those action sequences… it must have been dizzying. But the release of Chinese 3D action films (converted or not) outside of China and selected cities in America seems like a faraway dream.