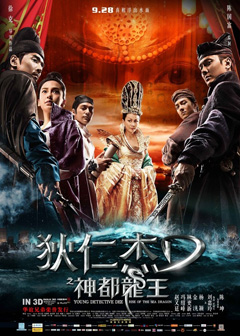 I have to tell you, I’m VERY disappointed. A lot of people told me Tsui Hark’s latest (following Flying Swords of Dragon Gate) was awesome and great fun, and if Detective Dee and the Mystery of the Phantom Flame was of any indication, Young Detective Dee had the chance to be great entertainment.

But yes, this thing keeps proving time and time again that prequels (or sequels) are rarely as great. After magically appearing on our lives in a role on Monga, Mark Chao has showed up in everything you could think of- from sappy romantic dramas (opposite Angelababy), rom-coms [1], coming of age stories [1] and serious social commentaries [1]. Add to that a fantasy action pseudo-property as he takes on the role of a young Andy Lau as Dee himself.

In this adventure, as the title of the film suggests, there’s a sea dragon involved that ends up destroying the Tang Dynasty’s ship army — or is it? Believed to be an angry god, the city decides to make a human offer in the shape of Yin Ruiji (Angelababy), a beautiful courtesan whose romance ends up entangled with the dirty plans to topple the Tang Dynasty — smartly handled by Empress Wu (Lau) — once and for all.

Though having liked Detective Dee doesn’t necessarily guarantee you’ll like or hate this, as both are similar but at the same time complete opposites. While its original gave us a mystery of fantasy tones that’s solved logically within a political context, Young Detective Dee is a fantasy movie with political tones within a mystery context, a characteristic that immediately discourages those who love procedural dramas. Solving the who and how they did it takes a backseat, as we try to figure out what’s going on with the magic.

There are chase and fight scenes as any Tsui Hark movie, but never as entertaining or as well acted as Flying Swords — Angelababy’s onscreen range doesn’t even seem to match Li Yuchun, let alone Zhou Xun or Kwai Lun Mei. Moreover, the story delivered here doesn’t feel of epic proportions and leaves you only with a faint chuckle whenever the film returns to Carina Lau. Especially during the scenes involving the Imperial Remedy, and the short scene during the credits.

Production values are decent, with highlights in set design and costumes — especially the one who gets to dress Carina Lau and, okay… Angelababy — but special effects (from makeup and computer visuals) weren’t consistent throughout. Creature makeup looked straight out of an episode of Buffy the Vampire Slayer (if you recall, the one in which Giles turns into a Fyarl Demon) while Chen Kun, who makes a cameo, has a decent-looking ape hand.

It’s not a terrible film, but it’s rarely fun.