Love is not Blind 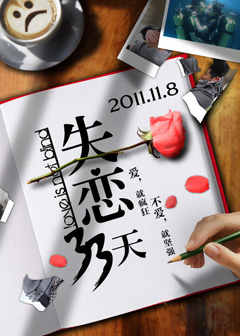 Is this China’s first Little Movie that Could?

The expanding Chinese film market has seen one earth-shattering record after another over the last couple of years with films like Aftershocks and Let the Bullets Fly — which had budgets of a little over $20M USD, making over $100M USD during their theater runs — as well as non-domestic imports like Avatar, which had the staggering budget of $237M USD, and made $180M dollars in the country.

Now comes Love is not Blind — which is a purely nonsenical title considering the literal translation of the film would be something like Lovelorn for 33 Days. With a budget of just over $1.4 USD (9M RMB), it has nearly already made $30M USD (or 190M RMB) in just a week.

Devoid of any complex special effects or tightly choreographed action sequences, Love is not Blind is a pseudo-indie rom-com.

The movie tells the story of XiaoXian (Bai), a Beijing wedding planner whose relationship with her longtime-boyfriend Lu Ran (Guo) has failed. Explaining in pretend scientific and sociological ways of the art of break-ups in one of the most complex scenes during the whole film, worthy of a true Chinese version of What Women Want, XiaoXian’s life completely falls apart. Thus, beginning the count of days being lovelorn.

Broken-hearted, her personal life is screwing with her professional life — you gotta admit, it’s tough to be a broken-hearted wedding planner. But with dumbfounding help from her own boss (J. Zhang) and her unusual friendship with XiaoJian (Wen), XiaoXian actually learns something worth learning in a romantic comedy. She’s got someone that will be there for her.

XiaoXian is refreshingly real. She’s hurt but is adamant about not showing it. She realizes that she had lost herself while she was with her boyfriend, and she learns a thing or two from her boss and another unlikely confidante in XiaoJian. There are a lot of original moments in the “romantic” aspect of Love is not Blind. Even when you think the film has taken a wrong turn, it stops to tell you it’s not going there.

The only aspect that seemed to go against the natural flow of the film was part of the ending. It related to a subplot involving a ceremony that XiaoXian was arranging for a couple renewing their vows. The film’s creators tried to tie this situation in with her own storyline, telling us that relationships are like a refrigerator that you keep fixing instead of throwing away — which is true — but XiaoXian’s original issue was completely different.

In reality, Love is not Blind is a friendship movie about a fag hag and her fag. Though, there will be those who will argue that XiaoJian is not gay — because the lovelorn count goes back to one. Those thoughts, however, should be put to rest, considering XiaoJian is desexualized like many other gay guys in mainstream films. Despite that, Zhang Wen’s XiaoJian is more than just the Token Gay. He is second in command to Baihe Bai’s XiaoXian, and their relationship is what makes the film.

As for The Little Movie that Could title? Commercially, yes. Sadly, critics aren’t falling for it — but then again, sometimes critics don’t know how good something can be until someone else tells them.