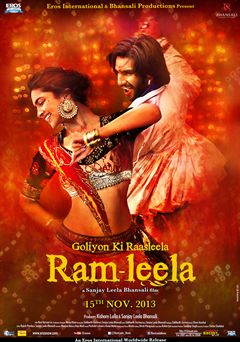 Loosely based on Shakespeares’ Romeo and Juliet, Goliyon Ki Rassleela: Ram-Leela tells the story of two battling families that drive their town into chaos after a Rajadi named Ram (Singh) falls for a Sanera named Leela (Padukone).

When I first saw the trailer for this I was excited to see it. It had Ranveer, bright colors, set in –always beautiful– Gujarat and, *da-dum* was directed by Sanjay Leela Bhansali. I KNEW I had to see it in the theater. I’m lucky enough, I know, to live in a city with a large Desi population so I get to see plenty of Indian films opening weekends in the theater and on the big screen, so I was happy to run straight into this films’ waiting arms. And happily, for once, I wasn’t disappointed by the actual film. Ram-Leela was no let-down.

The story was set up well, with a humorous entrance into the feud that has been haunting this Gujarat town for hundreds of years to see how much the families hate one another and to what lengths they’re willing to go to ensure that they keep that feud going. For a man as young as Ranveer, and with as few films to his name (this is only his 4th starring role), he sure got a big “Hero” entrance in Ram-Leela. Surrounded by a crowd, cruising in on a motorcycle (with no one steering, mind you) and singing away. I haven’t seen such an entrance in a mainstream film for anyone other than Salman Khan for awhile now.

I’m going to admit that while I liked Ranveer in his previous films, this role pushed me into fan status. And before you ask; no, it was not his over-exposed abs in Tattad Tattad [clip]. Ranveer played Ram as if he was made to play him, he was magnetic in this role. I could watch him play that character forever. And speaking of magnetism, Ram and Leela were drawn together in this film like moths to a flame. I can’t properly describe how well these two meshed on screen, but their performance of Lahu Munh Lag Gaya [clip] was breathtaking and spellbinding. I’ve seen my share of Holi celebrations, but this one takes the cake. Sign me up for next years’ festival if this is what can happen! The choreographers for this film, Ganesh Acharya, Vishnu Deva, Terence Lewis, Sameer and Arsh Tanna deserve a standing ovation for each of the musical numbers because I was enchanted for each and every song.

Let’s get down to what really made this film spectacular for me. The women. If you’ve been looking for a film that showcases the strength of the female spirit, look no further than Ram-Leela. Deepika played a defiant, powerful and strong-willed “Juliet.” It’s refreshing to see a female lead that when faced with adversity looks it straight in the face, smirking the entire time. I did have one problem with her though, at one point she’s dragged off against her will and I would have liked to see some of that spunk and fire come out in that scene, I was literally saying to myself in the theater “Come ON” as she was dragged away. They turned our strong heroine into a lame damsel-in-distress and it annoyed the heck out of me. But let’s talk about Deepika Padukone; a bright new face just 7 years ago that I can say has grown from film to film. All her previous roles were leading to this. She was fantastic; finally grown into an actress that I can believe in. Her previous work has been a bit stiff as she struggled with her more difficult emotional roles, while her dancing wasn’t always amazing either. Ram-Leela has pushed her in to Super Star status in my book.

Don’t fret, though, there are more strong females in this film! Supriya Pathak was sublime as the hard-shelled, slightly pagal, vindictive Baa. I haven’t liked a negative character this much since Sanjay Dutt in Agneepath, and I like Baa even more! I’d be surprised if Supriya isn’t nominated at the Filmfare Awards this year, she was just outstanding. And let us not forget the Behenjis [1]. I was really expecting the sister-in-laws to just be normal boring, “follow your husband” characters, but they both surprised me in their own ways. Raseela (Chaddha), Leela’s sister-in-law stood up for what she believed in even when it went against her intimidating mother-in-law. That doesn’t sound like very much to be praised, but in some cultures it is. Kesar (Bisht) takes the cake in my mind, though. In her small amount of screen time, she managed to portray strength of will and spine we rarely see in supporting characters. Who needs the men in the family when these ladies are the ones who you need to look out for!

Despite all of these positives, I did have a few gripes with the film, which started strong and had great momentum, but by the end of the third quarter of it things started to get muddled and a bit confusing. The dialogue and plot got over-complicated and story was beginning to drag. And the end, I love a good surprise ending, but what happened was just so predictable it was kind of boring. If you look past these though, you have a great movie. Undeniable chemistry between all of the actors, choreography I haven’t seen the equal of for years in Bollywood, and stunning sets and costumes; you have a beautiful film that will enchant for years to come.