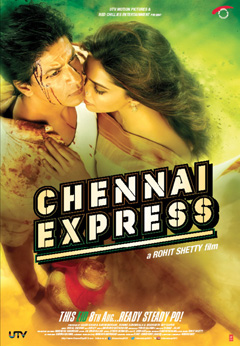 I gotta give it to Bollywood — it takes a bit of talent to make movies longer than two hours not seem THAT long, as I’ve found myself in innumerable Hollywood and Japanese movies asking myself “IS IT OVER YET??” Though, I must admit Chennai Express is short by its standard clocking at barely 2.20hrs.

It explores familiar territory for Shahrukh Khan and his iconic quicksilver-tongued Rahul, and a mish-mash of storylines ranging from taking a bit of DDLJ [funny spoof and all] to a hint of Veer-Zaara, a sprinkle of Swades with a dash of Bollywood action comedy, and a My Name Is Khan garnish. And don’t EVER miss the Life of Pi mention, it’s so ridiculous, it’s onomatopoeic funny.

In Chennai Express, Rahul is an orphan, raised by his grandparents who own a candy shop. On the day of Rahul’s grandfather’s (Lekh Tandon) 100th birthday, he kicks the bucket as he awaits the 100th run of cricket. At forty, Rahul had always felt anchored by his love for his grandparents, so suddenly… kind of free, he jumps at the opportunity when his friends suggest partying in Goa [1] … until his grandmother (Kamini Kaushal) informs him that his grandfather’s last wish was having his ashes immersed at the Ganges and in the holy waters of the Rameshwaram [1], sending him off on an adventure South instead of North, as he encounters Meena (Padukone) on board of the Chennai Express.

I have to admit that I thought the first half of Chennai Express was pretty comical, even with the over the top product placement so in your face, I couldn’t help but laugh (and later gasp, even though I’m not fond of phones). There was some awkward dialog-translation-issues, which included parentheticals with what language they were speaking. If I’m not mistaken it included Maithili besides Tamil and regular Hindi, hindering the flow of the reading on top of the speed of Bollywood content. To me it seems; mainstream Bollywood with the dance sequences, colors and self-references, it usually feels like they’re made for an audience that needs to have EVERYTHING. On top of the language information, I began to feel quite overwhelmed, but by the second half of the film, Chennai Express really had used much of what it had to offer.

When I was introduced to Padukone in her role on Om Shanti Om, she felt a somewhat bland to me… and with the age disparity between her and Khan, I was already chucking Khan into the leading actors who kept aging, while their love interests didn’t [1], but I was surprised they mocked it a little instead of leaving it hanging around. In regards of its story, I feel this tries to share too many qualities with Khan’s genre-changing DDLJ (but at least it knows it) — besides spoofing it at the beginning, they even have matching “I get drunk” sequences in 1 2 3 4… Get on the Dance Floor [1] with a cameo by Priyamani. It’s probably the only high-strung musical number that even seems speed up. However, Chennai Express continues by displaying the same issues I had with DDLJ, by letting Padukone take a step back, letting Khan earn his place as the worthy “ordinary man” who deserves the girl.

As a cherry-popping TRUE Bollywood experience on the big screen? I just can’t believe the disparity in how some of the musicals clips uploaded online lack color contrast despite the fact that both the clips and the cinema used digital sources. For example, during the sequence of Kashmir Mein Tu Kanyakumari [1], which is as colorful as a daytime musical sequence can be, the colors on the upload look quite muted compared to what was on the big screen. Or maybe I’m just not normally accustomed to caring about picture quality in fluff content.

You can get the Chennai Express OST on iTunes.