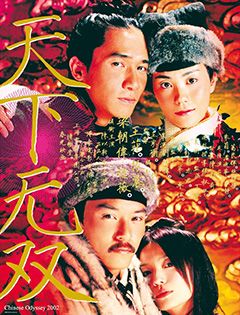 Is it possible to write a nonsensical story with a purpose? Jeffrey Lau’s early millennium period comedy -sometimes wuxia sometimes musical- of “imprisoned” Imperial siblings that meet their destined lovers in the outcasts of a tiny village during the Ming dynasty seems to prove it.

Known for her elusive nature and ethereal pop diva image (and seldom silly Weibo responses [1]), Faye Wong plays Princess Wushuang who alongside her to-be-emperor brother Zhengde (Chang) desire to escape the imprisoning walls of the Forbidden City, but are often caught, until the Princess manages to avoid the guards and-

According to unofficial historical records, the Princess used secret martial techniques, vaulting right out of the Palace. But according to the secret papers, File number 2046, Princess Wushuang used a special skill that won her fame later.

Her secret weapon was her head!

Literally using her head, the Princess bursts open the doors to the Palace and heads over a tiny village dressed up as a boy, only to meet the town’s bully Ah-Long (Leung) who vows to find her boyish sister Phoenix (Zhao) a husband, matchmaking the both of them together and finding himself -somewhat- attracted to her. Intentional bad prosthetic makeup, silly wuxia, anachronistic dances and inventions (and possibly Cantonese puns) overflow this popular Mo Lei Tau film [1] produced by Wong Kar-wai (among others), and starring all these serious actors.

Without being aware of what Chinese Odyssey 2002 could be about, the opening title sequence might remind some of Chen Kaige’s Palme d’Or-winning Farewell my Concubine due to the Chinese Opera intro (in this case Huangmei instead of Beijing) that strikes throughout the film, accompanying the (drinking brothers) love duets as our characters fall in and out of love with each other to prove the purity of their romance in this Hong Kong parody of The Kingdom and the Beauty meets As You Like It meets A Midsummer Night’s Dream.

Despite starring serious actors (or respectable personalities not known for their comedic chops and silly antics), the film manages to showcase a certain wholesome vibe and straightforwardness that make the film extra hilarious and a delightful surprise. Unlike the more popular films in the genre (Kung Fu Hustle or Shaolin Soccer), Chinese Odyssey 2002 avoids big effects or big action sequences, for example; Ah-Long’s horse-ridding gang battle is cut short in favor of funny police intervention and his confrontation with sister Phoenix is humorously done with some fake slow motion jumps and somersaults; all of which may look silly to people, but done with such serious expressions, they sell you the jokes.

Overall, the friendly rapport shared by the cast — Wong and Zhao are close in real life — topped with Lau’s ability to extract a sweet and solid love story -out of all the silly shenanigans these character may experience- and soundtrack make Chinese Odyssey 2002 highly entertaining.

You can listen to the popular Chinese Odyssey 2002 Soundtrack on Xiami.