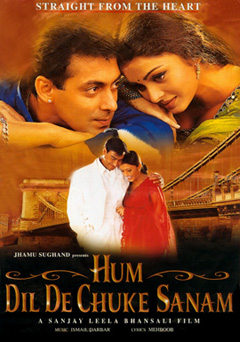 By the time I got to watch my second Bhansali movie, I was overwhelmed by the beauty of his picture frames, and how the aesthetics in his work enhanced my movie experience. Seriously, Hum Dil De Chuke Sanam has got to be the most beautiful movie EVER to include a fart joke in it.

Miss World (as people like to point out constantly) Aishwarya Rai plays the vivacious Nandini Darbar, the favorite daughter of a renown Indian classical musician- she had her own freedom and had the education, but… worst of all: she’s of age to get married. Enter into their lives the Indo-Italian musician Sameer (Khan) who’s come to stay with the family and learn from the Indian classical master himself.

Of course, Nandini and Sameer tease, hate and begin falling for each other. They believe they’re having the grand time of their lives hiding this “secret” from Nandini’s family, but their seemingly innocent and playful affair hits the fan and Sameer is kicked out of the Darbar’s home. The Darbar patriarch feeling like his trust was betrayed by the guest he welcomed into his home makes Sameer promise not to EVER contact his daughter again as payment for his musical education. Nandini is devastated and gets all emo, so her family does what it needs to do: they give her away to the family of Vanraj (Devgan).

On paper, Hum Dil De Chuke Sanam sounds extremely silly. It didn’t help to see Salman Khan’s credit to make me groan either, however, after catching the number for Man Mohini [1], I was in for the ride. I swear, each and every single track used in the Hum Dil De Chuke Sanam soundtrack is incredible. IMDb rumors [1] has it that Bhansali and music director Ismail Darbar spent two years working on it, and it wouldn’t be much of a surprise. My experience with Indian films have always tend to rely on the subtitles of songs, but with this soundtrack, I can just sit back and enjoy most of the tracks with or without knowing what they really mean as they work as stand alone pieces, but are best enjoyed when catching Bhansali’s visuals… especially in numbers like Dholi Taro Dhol Baaje [1].

Though my love affair with Salman Khan hasn’t panned out the way he’d like me to, this disdain I have for him worked for me within this story. While I don’t know if I should attribute the chemistry between Khan and Rai to their acting talent or the eventual relationship that developed in real life, there was something in their performances that didn’t make me hate them considering the themes dealt with. In fact, by the second half and its resolution, I felt Hum Dil De Chuke Sanam was challenging me culturally. I wasn’t bothered by it at all, and I was surprisingly Team Devgan all  the way.

The worst thing in the whole project, though, isn’t a plot point nor a directorial choice; it was a simple production misstep. They didn’t freaking shoot the film in Italy, and  tried to pass off Budapest as an Italian town… wait for it: WITHOUT HIDING signage and other non-Italian text. They even showed classic Budapest  spots as if they didn’t care. It doesn’t hinder your enjoyment of the film (much), but it does leave you with a BIG F***ING WHY?.

You can get the soundtrack on iTunes.

I would also suggest a high definition watch for this one. Sadly, there isn’t one available at the time of posting.