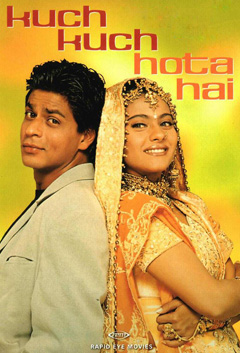 I’ve just started and I’ve already seen Kuch Kuch Hota Hai twice — best 6hrs. of my life. You see, this overly-long melodramatic rom-com is the best fluff I’ve watched… since I probably saw Sunny back in 2011. And I watched that one like 10 times that year.

In pure essence, Kuch Kuch Hota Hai which translates to “some things happen in my heart” is the road of a man looking to reconnect with his ex-best-friend, whom he lost touch nearly 8 years before. What makes this a melodrama, of course, is the setup. The first shot of the film has a puffed and teary Rahul (Khan) as he creamtes the rests of his wife, Tina (Mukerji), who has passed away after the birth of their child whom Tina makes Rahul swear will be called Anjali (Saeed). It’s like My Life Without Me when Tina gives her mother-in-law (Jalal) 8 letters to be given to young Anjali in each of her birthdays.

On the year Anjali is set to turn 8 and receives her mother’s last letter, she is told the story between Rahul, Tina and Anjali. Indian films love these stories within the story, it seems. I’ve only seen a handful, but it’s been a device in more than 85% of them. So while the first half of the film deals with showing us the relationship between ladies man Rahul in his college days with his best friend tomboy Anjali (Kajol), how he fell in love with Tina and how this came between his relationship with his friend; the second half of the film deals with Rahul’s kid Young Anjali plotting to get her father to get together with the Original Anjali.

It’s simple straightforward storytelling and you wonder why they needed three hours to tell it, but it’s so worth it because it’s so damn fun especially when your screen is full of Kajol’s huffing and puffing in less glamorous 90s clothing style, and that playful banter she had going with Rahul. At times it gets a bit boring to think how similar Shahrukh Khan’s roles can get (but he made up with Veer-Zaara), but it’s all fun and game in here with the musical numbers, which do seem to be a LOT more filler than in DDLJ but also seem to be a lot catchier — Koi Mil Gaya [1] — and easier to sing along to, like the title song [1].

Though I know Kuch Kuch Hota Hai isn’t as “serious” in cultural themes as DDLJ or as epic in its love story like Veer-Zaara, I actually think it aids its playability factor. If the film was centered in Kajol’s character, instead of SRK’s, I even could have added it to my list of Top Flicks About Chicks, because both Kajol and to an extent Rani’s characters are quite compelling, and Young Anjali stands her own. My only girly grip is that Anjali should have won that basketball stand-off, I’m just saying… with or without her Sari.

Overall, this is probably a GREAT pick to get into Indian cinema, though there’s always going to be that thing about the running time. Don’t blame me, blame Hollywood and their running time business. It’s spoiled me and the rest of the world. However, there’s no denying- after a session of KKHH, you can catch me swiftly shoulder-thumping to Kuch Kuch Hota Hai.