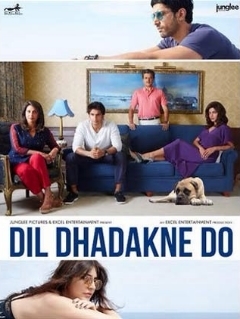 Much like the biopic, the road-movie genre is also a relatively new commodity in Bollywood. The Akhtar siblings, however, seem to have a predilection for it. In fact, it was Farhan Akhtar’s debut feature, Dil Chahta Hai, which arguably started the trend that has more recently spawned critically and commercially successful road-related films such as Anurag Basu’s Barfi!, Ayan Mukherjee’s Yeh Jawaani Hai Deewani, Imtiaz Ali’s Highway and Shoojit Sircar‘s Piku. In between, Akhtar’s Excel Entertainment produced two more thematically similar efforts: Reema Kagti’s debut called Honeymoon Travels Pvt. Ltd., a bus journey undertaken by six couple on their honeymoon, and the second feature by his sister Zoya, Zindagi Na Milegi Dobara, co-written by Kagti, a story of three childhood friends who set off to Spain for a bachelor trip.

Zoya‘s new film, Dil Dhadakne Do (lit. trnsl. Let the Heart Beat), once again involving Excel and Kagti (in producing and writing capacities, respectively), technically isn’t set on the road but it belongs to the genre for all intents and purposes. In here, the sea replaces the road as a metaphor for life, for personal growth and change. And since it deals with the trials and tribulations of a family, the cruise ship it is set on takes on added meaning.

In Zindagi Na Milegi Dobara, Zoya employed voice-over poetry written by her father, the famous screenwriter-lyricist Javed Akhtar, almost as musical stops for structural purposes. In this film, she has decided to tell the story of a dysfunctional family from the “perspective” of its pet bullmastiff, Pluto (voiced by Aamir Khan; in some ways recalling his socially inquisitive character from Rajkumar Hirani’s PK). Pluto’s narration serves as both framing device and a running commentary on the action. It’s a risky move, but the filmmakers manage to pull it off magnificently.

Deeply enmeshed in the stranglehold of patriarchy and privilege, the Mehras seem quite normal on the surface. And what a surface it is—this is quite possibly the most elegantly designed film Indian cinema has produced in recent years. Although devoid of his customary geegaws, and gaudier than the rest of the proceedings, the gorgeous promotional video of the title track even faintly echoes Wes Anderson’s The Life Aquatic with Steve Zissou, another road movie set in the sea. Speaking of which, the family’s patriarch, Kamal Mehra (Kapoor), is nearly as much of a prick as Bill Murray’s Zissou. But just as Anderson did in his movie, Zoya explores his flaws rather than merely condemning them. She accomplishes something similar with his wife, Neelam (an excellent Shefali Shetty), and a number of other characters in the film.

For all its virtues, Zindagi Na Milegi Dobara felt like a work in which Zoya was still trying to find her own voice. It came across more as an extension of her brother’s aforementioned debut, Dil Chahta Hai (besides serving as a producer, Farhan has also been involved as an actor in all three of Zoya’s features). Particularly disappointing were both of the female characters in the film. Dil Dhadakne Do is quite a departure in this regard. Along with the family’s long-suffering matriarch, who has been conditioned to instill the same confining values in her children, Zoya and Kagti have created quite a fascinating character in Ayesha (Chopra), the unhappily married daughter, who may seem relatively modern and independent (she’s a rising entrepreneur) but is made to bear the guilt of her success at the expense of a child at every turn. One of the keenest insights offered by the film is the fact that patriarchy isn’t limited to men restricting and regulating women, but also women doing the same to other women, often their “loved ones.”

The film’s other piercing them is almost Freudian: the parents’ narcissistic investment in their children—perhaps a bigger issue in societies, like India, where children tend to stay longer with parents. Given the fact that an astounding 65% of the country’s population is below the age of 35 makes it even more pertinent. The Mehras’ investment in their lone son, Kabir (Singh), suddenly turns more literal once they discover the truth about their sagging business. The Mediterranean cruise they’ve organized to celebrate their three decades of marriage, one built more on compromise than anything else, now features a rival magnate, one whose daughter was recently dumped at the altar.

But as Pluto rightly observes, when have children ever acquiesced quietly? Once on the ship, Kabir finds his attention drawn to a member of the dance troupe, Farah Ali (a terrific Anushka Sharma), who once ran away from her conservative Muslim family in Birmingham to pursue her dreams. The chemistry between Singh and Sharma is just as electrifying here as it was in Maneesh Sharma’s much-beloved Band Baaja Baaraat.

Almost novelistic in its use of recurring motifs and acutely observed characterizations, Dil Dhadakne Do works not only as a drama but also as a comedy (of manners and mores), feminist tract, social satire and, yes, a road movie. In a way, it’s a new, modern kind of masala film [1], one that likely won’t be accepted in its entirety by those who still harbor strong feelings about the old, often regressive kind. More importantly, it’s a wonderful piece of cinema.